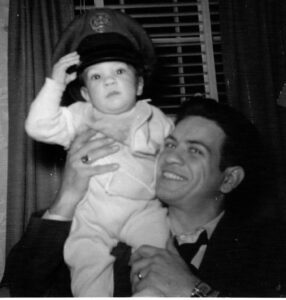 Edward Norman DeGurski, a long-time resident of Malden, passed away suddenly at Mass General on October 10, 2018 at the age of 83. Ed was born and raised in Chelsea. In 1953, he met Rosalie (Abatematteo), his soulmate and loving wife of 61 years. He joined the U.S. Air Force in 1955 where he served 4 years active duty at the rank of Staff Sergeant on the Texas Towers radar defense facility. After that he had a long career as an engineer in the aerospace industry. Ed and Rosalie had two children, Edward and Stephen, whom he adored. Ed was an avid church-goer and devout Catholic. He doted on Annie, his beloved Bichon Frise. He spent his time going to church, volunteering, traveling and enjoying life with his wife, Rosalie. Ed is survived by his wife Rosalie and his son Stephen, his son-in-law Michael Begay, his daughter-in-law Mary DeGurski, and his grandchildren Kathleen DeGurski and Edward DeGurski Jr. He is also survived by his sisters Roberta DeGurski-Cresta, Claire Reese, Dorothy Robichaud, Nancy Janiak, Helen Tryder, and his brothers James DeGurski, Robert DeGurski, Richard DeGurski, and Ralph DeGurski, as well as many in-laws, nephews and nieces, and a multitude of loving friends. He is predeceased by his son Edward A. DeGurski. He is also predeceased by his sisters Marie Galvin, Edna DiFiore and his brother John DeGurski. He will be cremated at Boston Cremation and a funeral mass will be held to celebrate his life on Monday, October 22, 2018 at 11:30 AM at St. Joseph’s Parish, 173 Albion Street, Wakefield, MA 01880. Friends and family are respectfully invited to attend. In lieu of flowers, the family asks that donations be made in Ed’s memory to St. Joseph’s Parish where he was a devoted parishioner and volunteer.