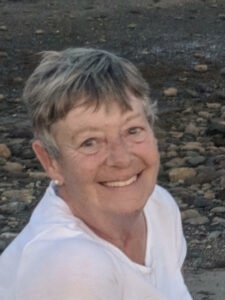 Elaine M. (Dube) Fernald of Lowell Ma., formerly of Salem Ma, beloved wife of the late David E. Fernald passed away at The Kaplan House at the age of 74 On Wednesday June 1 after a short, but courageous battle with Lung cancer.
Born in Salem Ma., the daughter of the late George and Lucette Dube, Elaine graduated from St. Chritienne Academy in Salem and pursued a degree as an LPN and moved to Bangor Maine with her husband Dave whom she shared almost 40 years of marriage and began her career in Nursing at the Eastern Maine Medical Center in the neo-natal intensive care unit and pediatric oncology. Elaine then moved to Salem Ma. and continued her career in Nursing at various locations on the Northshore until her retirement from Lahey Behavioral Health in 2018. During retirement, Elaine enjoyed traveling, spending time with her grandchildren, relaxing with her girlfriends and telling stories.
Her greatest pleasures were camping with her children when they were young in Ossipee NH, hosting cookouts in the backyard with family and friends, and later spending time with her grandchildren.
She is survived by her children, Brent Fernald and wife Julie of Red Lion, Pennsylvania and Brandon Fernald and wife Kelly of Danvers, MA; two grandchildren, Logan Fernald of Danvers and Jacob Fernald of Red Lion, Pennsylvania .  She was predeceased by her sister, Carol King. She is also survived by Allison Fernald (niece), Sam Fernald (nephew) and Hannah King (niece) and many dear friends.