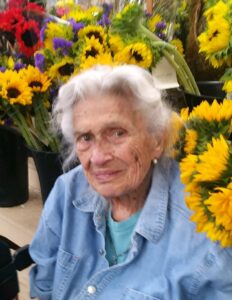 At the age of 98 and surrounded by her family, Elda Gougian died at her home in Lexington, Massachusetts on February 21, 2019. Elda lived a full life punctuated by her love of family and friends, a respect for people from all walks of life, and an appreciation of the wonders of nature and the beauty of art.

Born in 1920 to Marietta Iacati and Francesco Bodo, Elda was raised in the South End of Boston with her sisters Vicky and Gloria. She spoke often of her upbringing in Boston. Living alongside other first generation immigrant families from all corners of the world, Elda developed many deep and long-lasting friendships. She loved her neighborhood and the City of Boston and often reminisced of the “Old German Church” across the street from where she lived, the girls club called the “Lincoln House”, and the Swan Boats at the Public Garden. As a youth, her summer trips to Gloucester with her friends began her lifelong love of going to the beach.

Elda married Walter Gougian, also from an immigrant family in the South End. He was an aeronautical test engineer, involved with the development of jet engines which required much travel around the world. After brief stays in California and Maine, Walter and Elda moved into the home they built in Lexington. True to their Boston roots, they incorporated recycled bricks, stone and street lamp-posts from the city into their new mid-century suburban home at the edge of the woods. They raised a family there – Maria, George, Lisa and Jeannie. She pursued her love of art, joined the Lexington Arts Guild, and began a long and fruitful avocation of painting. Elda was a wonderful cook, and hosted many events for family and friends. Summer cook-outs, Christmas Eve gatherings, Patriots Day Parade parties and the annual neighborhood “Block Party” are forever etched in the memories of her family and friends.

Widowed at the age of 52, Elda’s resiliency was tested as she continued to raise her teenage children. Over the next half century, Elda’s family would grow with son and daughter in-laws and many grandchildren and great grandchildren. Elda and her home in Lexington, would always be a central point in the lives of her extended family. Her artistic side flourished and resulted in many beautiful paintings. In pursuit of her passion for her art, she formed new friendships with other local painters, took classes and attended retreats. Her gardens and her pet cats were constants in her life, and provided much joy. She was active and vibrant into the latter years of her life, and an inspiration to all who knew her.

Elda’s life will be celebrated in a private ceremony for family and friends. Memorial donations may be made to Mass Audubon. You may donate online at http://www.massaudubon.org/honorary-memorial-gifts or by mail to Mass Audubon, Attn: Sarah Arsenault, 208 S Great Road, Lincoln, MA 01773.