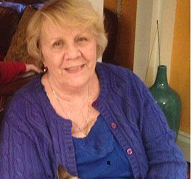 Elizabeth Hall of Malden, Massachusetts passed away on February 6, 2015. Betty was the beloved wife of the late Robert Hall. She is survived by her children and their spouses, Linda and John Little of Jackson, NH, Nancie and John Georgopoulos of Raleigh, NC, Dave Hall of Malden and Mike and Lauren Hall of Reading. Her grandchildren Zack and Makayla Georgopoulos and Anna Hall were the light of her life.
She was the much-loved sister-in-law of Charles and Ann Hall of Falmouth, and sister of Shirley Billings of Sylacauga, AL, Ralph Billings of Las Vegas, NV and the late Charles Billings. Both Joseph O’Keefe of Billerica and the late Thomas O’Keefe were like brothers to her and she thought of their wives and children as true family. She is also survived by an aunt and many nieces, nephews, cousins and close friends.
Betty was born on October 19, 1935 in Gardner, Massachusetts to Charles Billings and Yvonne Marie Roy. She graduated from Malden High School in 1955 where her artistic ability led to a gold key award and college scholarship. She married Robert Hall in 1962, stayed home to care for her young children, and later worked at Robinson’s News Agency in Malden for many years.
In order to accommodate family and friends with varying beliefs, those traveling long distances, and those who are ill or infirm, two options for visitation will be provided, with no expectation that anyone will attend both. The family would also like to send love and support to those who may not be able to attend for whatever reason, and understand that some may simply want to remember her as they saw her last.
Visitation: Tuesday, February 10th from 4:30 pm to 6:30 pm at Boston Cremation 287 Main Street, Malden, MA.
Funeral Mass: Wednesday, February 11th, at 9;00am at St. Joseph’s Church, 790 Salem St., Malden. Immediately following the service she will be put to rest with her beloved husband at Holy Cross Cemetery, Malden.
In lieu of flowers, please make a donation in her name to your church, a local animal shelter, an organization dedicated to finding a cure for Alzheimer’s Disease or to the charity of your choice.