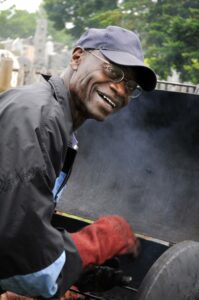 Emerson joined the US Army in 1943 and when D-Day came, he was anchored off Omaha Beach, working as a winch operator on a ship unloading men, arms and supplies. He and his comrades later followed General Patton to Berlin, supplying the troops via the Red Ball Express. Recently, Emerson was presented with the Legion of Honor by the French Consul General, for his participation in the liberation of France during WWII. Emerson was a member of the VFW Post 8772 in Dorchester.

Emerson’s work life here in Massachusetts began in 1969 and centered around treatment of young black men and community projects at Boston State Hospital. He later worked at Solomon Carter Fuller Center in the South End. After age 50, he decided to go back to school. He attended Boston University and graduated with the first class at Cambridge College, earning a Master’s degree.

Emerson is widely known as a superior grill master and at one point manufactured and sold his dry rub and famous sauce. He was a long time member of the Insight Meditation Society as well as the JP Men’s Meditation Group.

A memorial service will be held Sunday October 16, 2016 at 2:30 p.m. at the First Church Unitarian Universalist in Jamaica Plain. Burial was private. In lieu of flowers, the family requests that donations be made to First Church of Jamaica Plain or VFW Post #8772, 54 Woodrow Ave., Dorchester, MA 02124.