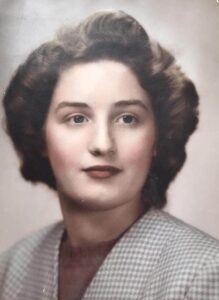 Chickie was an active member of St. Joseph Parish in Holbrook where she managed the lunch program for St. Joseph’s school and brought her culinary skill and knowledge of Italian cooking to provide nutritious Mediterranean style lunches for all the children whether they could afford it or not. She loved spending time working in her garden, growing fresh vegetables for her family and hosting large family gatherings in her yard for her immediate and extended family. She especially enjoyed her quiet time reading and listening to opera. She loved to travel, especially to her family village of San Donato Val di Comino in Italy. She was a kind and gentle woman who loved to have a good time with her family and laugh, oh how she loved to laugh. She will be missed!!

In lieu of flowers, donations may be made to the Hart Speech Foundation, 85 Boatwrights Loop, Plymouth, MA 02360 or at hartspeech.org.