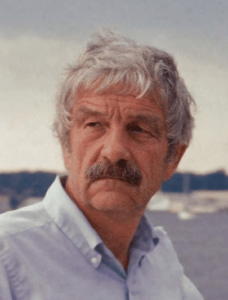 Whatever Forrest Forsythe set his mind to; he did zestfully and fully, immersing himself in his interests so deeply that they led him into one career after another, and all around the world.

Forsythe, who recently celebrated his 90th birthday and lived in Lincoln, Massachusetts and New Orleans, died peacefully on Nov. 18, 2018.

Forrest was born to Harold and Mildred Forsythe in Lakewood, Ohio. He spent his childhood in and around Cleveland, a center of the then emerging United States aviation industry, and famous for hosting the National Air Show. Young Forrest would forego chores at home to watch the most famous daredevil pilots of the day, racing wing-tip to wing-tip, around 50-foot-high pylons, in the Thompson Trophy Races. From this exciting influence he naturally developed an ambition to fly.

Years later, while enrolled at Baldwin-Wallace College, Forrest cleaned planes at the local airport in exchange for precious hours in the cockpit. In 1950, Forrest seized the opportunity to enter the U.S. Navy in a program recruiting replacements for the thousands of pilots returning from World War II deployments. He became a Flying Midshipman, and was then commissioned as an officer.

Forsythe then served as a flight trainer in Pensacola, and a trainer of other flight instructors. He also developed an aptitude for photography which he practiced with enthusiasm and expertise. It was here that he met and married Martha Catherine Miller of Jacksonville, Florida.

But Forrest wanted to fly where pilots were most needed and was shortly assigned to the aircraft carrier USS Shangri-La, out of Mayport, Florida operating in the Pacific. He flew combat and reconnaissance missions in The Top Hatters squadron in a Corsair F4U, one of the Navy’s fastest propeller driven aircraft. He further became Weapons Deployment and Assistant Operations Officer, while back on shore Forrest and Martha’s first son, Scott, was born.

He was next transferred to Coronado, California, where their second son, Lee Kenneth, was born, and where Forrest pursued another lifelong passion of historic fine cars by acquiring a Jaguar XK120 into which he could barely shoehorn his young family.

A few years later, Forrest’s thirst for knowledge led him back inland, to New Orleans, a city that he would love deeply throughout his life. He enrolled at Tulane University and was awarded an undergraduate in Political Science and a master’s degree in International Relations. Being in New Orleans allowed him to immerse himself in a new passion; the city’s jazz scene and the complex history surrounding it. He and Martha became friends with Alan and Sandra Jaffe, who founded the jazz shrine Preservation Hall, and attended its opening with them — according to family lore; Martha was so pregnant that one of the aged musicians offered her his pillowed chair. Their third son Todd Stuart was born 6 days after the last set.

With crisp new degrees in hand, Forsythe next moved his young family to Germany, where he taught at the North Atlantic Treaty Organization School in Oberammergau, home of the famous Passion Play. As the only US Navy officer at a US Army base, he taught nuclear armament policy to the commanding officers of NATO allies; he was very proud thereafter of having taught a generation of commanding officers to exercise extreme care, caution and consideration before deployment of such weapons. He immersed himself in German language and culture, including opera, and became an avid skier, taking the family on ski trips to Austria and Italy in the winter and to Verona and Lago di Garda during the summers. He further indulged his car passion, acquiring an Alfa Romeo GT 1300 junior that was once again too small for a family that was growing larger; his daughter Melynda Ann joined the world.

After more than four years, the family returned Stateside with Forrest’s transfer to Norfolk, where he was responsible for the maintenance and preparedness of nuclear weapons on the Atlantic coast. No children were added at this post, but a beloved miniature schnauzer, Bartholomew, joined the family. He retired as a full Commander in July, 1970, having earned the Joint Services Commendation Medal, National Defense Service Medal and the Expeditionary Armed Forces Medal.

During his time in Germany, Forsythe had been deeply impressed by European concepts of urban planning. Eager to share those, and searching for an appropriate next chapter, he became the Town Manager of Killington, Vermont. He developed an ecologically based land use plan for the rapidly expanding ski town, and the Johnson Recreation Center and pool, another of his legacies, is still free for local residents. He returned to his love of music, joining the local folk scene; following his lifelong pattern of diving deeply into anything that caught his attention, he taught himself to play hammered and Appalachian dulcimers, and then began to build them. Becoming yet more involved with this new home, he served as the Director of the Governor’s Commission on the Administration of Justice in Montpelier, improving the effectiveness of the State Police and implementing one of the first computer systems in the Vermont State government.

After a parting of ways with Martha, Forrest Forsythe was not yet done traveling. He next moved to Washington DC, working as an information management consultant for US government departments. Being so close to the Chesapeake Bay ignited a fresh passion for being on the water, and he acquired and sailed an Islander 38’ and refurbished a 1940 19’ Chris Craft Custom Barrel Back. He found a fresh home in the DC-area music scene, learning old-time mountain music and teaching himself to play the banjo.

In the late ‘80s he made a second attempt at retirement, moving to the Blue Ridge Mountains of Virginia, where he further pursued his interest in Appalachian music. At the same time, he indulged a long-term interest in fine reproductions of early American furniture — characteristically learning not only to identify them, but to make them himself.

In January, 2000, he married long-time friend Julie Kuhn, of Lexington, Massachusettes. They hosted several family reunions in Fancy Gap, which are fondly remembered, but also traveled the world together, including trips to Russia, Thailand, Laos and Cambodia, New Zealand, Argentina and Chile, as well as returning to the European countries and capitals he knew.

True to his life’s pattern, Forsythe was unable to rest quietly in retirement, and instead played a leading role in the protection of water resources in the upper Ottauquechee River Valley and protection of black bear habitat in Parker’s Gore, both in central Vermont. Working with the Governor and a broad variety of environmental stakeholders, and on behalf of the Farm and Wilderness Foundation, he forged an agreement that combined water for snowmaking to Killington ski area, protection of fragile ecosystems for future generations, and scholarship funding for the Farm and Wilderness summer camps.

Forrest achieved another goal when he and Julie moved to New Orleans; they lived quietly, enjoying the company of friends, while he reacquainted himself with his beloved jazz and the city’s famous food. He took pride in his work with the local chapter of the American Civil Liberties Union and his association with the Zulu Social Aid and Pleasure Club, a New Orleans community organization and parade Krewe. He and Julie rode the Zulu float in Mardi Gras parades, another long-held ambition, dispending beads and coconuts to exuberant crowds.

Forrest was a caring husband and role model as a father. With an insatiable desire for learning, he contributed insightful analysis on the world around him, made unique contributions in a variety of areas, helping to make it a better place. His friends noted that he did not suffer fools easily, and that only he could heckle a Quaker meeting.

Forrest will be missed by his family and the many friends he made on his journey through life.

Donations in Forrest’s memory may be made to the Farm & Wilderness Foundation (farmandwilderness.org) or the Louisiana ACLU (action.aclu.org/give/support-aclu-louisiana).