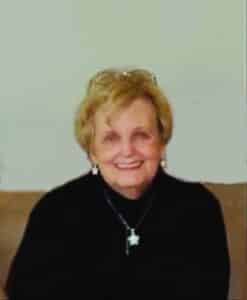 Frannie Lyons never put a raisin where a chocolate chip is supposed to be, and since she couldn’t do things in moderation, she’d throw in an extra dozen (or two) just for good measure.

Born Frances Anne Buntin on October 12, 1947 in North Little Rock, AR, she was the youngest child and only daughter of Russell and Eileen Buntin. However, she rejected gender stereotypes at a very young age, shunning the Shirley Temple curls and frilly dresses Eileen wanted, opting to do anything her brothers, Rusty and Joe, did, and usually better. Russell took great pride that she was the best shot of his children when they would hunt.

As a young child, the family moved to Memphis, TN where Frannie attended Blessed Sacrament school and Immaculate Conception High School and briefly Memphis State University. Serving as Tennessee’s Catholic Young Adults Vice President, she met her future husband, Robert Lyons. Their marriage was an adventure that included three daughters, an animal menagerie and led them to Greenbelt, MD, Alexandria, VA, Dallas, TX, Austin, TX, Denver, CO, and Greensboro, NC before they finally settled in North Andover, MA where they lived for nearly 30 years before retiring to The Pinehills in Plymouth, MA.

Frannie was the dog whisperer of the neighborhood, always good for a pitcher of Kool-Aid on a hot, summer day and the master of all things crafty. Equally comfortable in front of a stove, sewing machine or table saw, she gave generously of her time and talents. Family and friends will cherish the many treasures she put her love into including: Raggedy Ann dolls with dresses for every holiday; personalized, hand-carved foam pumpkins; all kinds of tie-dyed items; knitted hats and scarves (hundreds of which she donated to NICUs and the homeless), cross-stitch samplers and her delicious Grannie Frannie’s jams and jellies. She was always trying new recipes, adding her own personal touch and never afraid to serve them to company, because they always came out delicious.

Before Google, there was Frannie. She knew a lot about a lot and people often sought out her wisdom and advice that she readily gave in a loving, supportive way. Often, she would show up with whatever you needed to fix your problem, because she had it and knew how to use it.

Her greatest passion was animals, and she worked for many years at Bulger Animal Hospital in North Andover. If a family had to euthanize a pet and couldn’t handle being in the room, Frannie always volunteered to be there in place of the family so their pet wouldn’t be alone crossing the Rainbow Bridge. Being Southern, she would talk to people at the grocery store which sometimes made Northerners nervous and often embarrassed her children. When they would walk away and one of the kids would ask, “who was that?” she would answer, “Muffin’s mom.” She couldn’t remember the person’s name but never forgot the animal’s name. Her happy place was Camp Gone to the Dogs because it combined her first love, dogs, with crafts and ‘her’ people. Many laughs and escapades, usually initiated by her, were shared during camp.

Frannie faced many health challenges during her life but never complained. She was diagnosed with two autoimmune diseases, one leading to a liver transplant in 2005 with the liver being donated as a live donation by her daughter, Erin. She was diagnosed and beat breast cancer in 2011 by having a double mastectomy only to have the cancer return and metastasize in 2021.

Not one to like attention or fanfare, she requested a small, private service. If you would like to celebrate her life, please donate to: Pawfect Life Rescue 195 Old Millville Road, Uxbridge, MA 01569 https://www.pawfectliferescue.org/donate  or St. Jude Children’s Research Hospital 501 St. Jude Place, Memphis, TN 38105 https://www.stjude.org/donate/donate-to-st-jude.html?sc_icid=header-btn-donate-now.