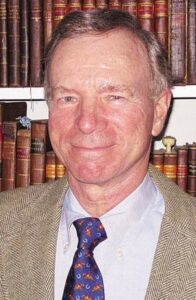 Frederick “Ted” Eayrs died after a brief illness at his home in North Middleborough on March 24th, surrounded by family. He was born in Middleborough, Massachusetts to Frederick E. Eayrs Sr. and Lorena Braddock Eayrs.

After graduation from Middleborough High School in 1964 he obtained a B. A. in History with Honors from Olivet College and a Master’s degree in American History and The History of Art from the University of Michigan. He began his professional career working at the Detroit Historical Museum, the Historical Society of Michigan and the S.P.N.E.A. (now Historic New England), where he served as Director of Properties. In 1979, he founded Blackburn Building Conservation LLC, specializing in the preservation of historic interiors and works of art. Over his 40-year career, he completed projects at internationally significant historic sites such as the Breakers and Marble House in Newport, RI, Tudor Place in Washington, D.C, the Old South Meeting House and Massachusetts State House in Boston, MA. Ted always believed in giving back to his community and during his long involvement in town affairs, served on the Charter Review Committee, Middleborough Historic Commission, Zoning Board of Appeals, two terms on the Board of Selectmen, Chairman of the Police Station Building Committee, Chairman of the Pierce Building Working Group and At Large Member of the Community Preservation Committee. An avid polo player for more than 38 years, Ted competed successfully with his son, Walter, and their Blackburn Farm Team in polo tournaments throughout New England, New York, the United Kingdom, and Ireland. He served as president of several polo clubs, helping to organize tournaments and bring others into the game. Ted also fox hunted for many years with the Norfolk Hunt Club, serving as president and whipper in, and organized a hunting fixture around his North Middleborough farm. Over the last 25 years, Ted and his son put together a four in hand team of driving horses, utilizing polo ponies. Along with his children and grandchildren, he participated in many charitable carriage drives and coaching weekends in Newport, RI, Stratford Hall, Virginia, Saratoga, NY, and Stockbridge, MA. He was a member of the Society of Mayflower Descendants, The Preservation Society of Newport County, the Newport Reading Room and served as Secretary of the Coaching Club. Ted will be remembered as someone who truly lived life to the fullest. A favorite Italian proverb sums up his outlook, “Chi non fa non falla” which translates, “He who does nothing makes no mistakes.”

In lieu of flowers, donations may be made in Ted’s honor to Old Colony Hospice & Palliative Care or the National Pancreatic Cancer Foundation. A private memorial gathering will be held at a future date.