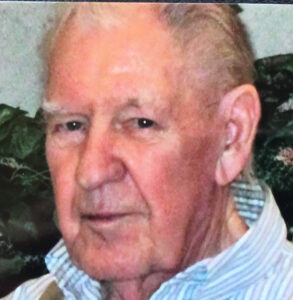 Gene Russell Dunifon, born in Detroit, Michigan, died peacefully at the age of 92 surrounded by family and pastor. Gene proudly served in the Navy as a mechanical engineer based in the Aleutian Islands near Alaska and spent more than 1,000 hours on a patrol bomber aircraft searching for enemy submarines. He met his wife, Rita, in Chicago while on military leave. After the service, with Rita’s encouragement, Gene attended night school on the GI bill earning a degree in mechanical engineering at Wayne State. Gene’s 25 year career at Ford Motor Company included holding the original patent for the collapsible steering column and engineering the first dual two-gate on the Ford station wagon. Gene and Rita raised their three children in West Bloomfield, Michigan, and then in retirement, moved south to explore life in communities throughout Florida and North Carolina. After his wife’s death, Gene found a home in Marlborough, Massachusetts at New Horizons “The Meadows” where he thrived among a wonderful group of friends. He especially enjoyed morning breakfasts and afternoon coffees with Frank Miller and Ann Paterson and other fun-loving friends; his interests were many – playing duplicate bridge, participating in musicals and sing-a-longs, painting (which he took up at age 70), wood carving, following the stock market, and last but not least, his afternoon martini! Gene’s generous spirit, keen sense of humor and positive attitude will be remembered fondly by his daughter Linda McInerney, sons Wayne and Dean Dunifon, daughter-in-law Kristen Olsen, grandchildren Adam Kurtzer, Liam McInerney and Kelly and Peter Dunifon.

A memorial service will be held at Sudbury United Methodist Church at a later date.