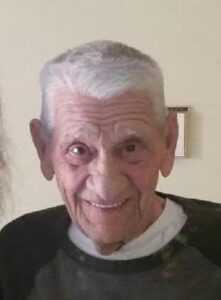 George worked for Mari and Sons Flooring, Somerville for over 40 years and later for Ricky’s Flowers, Union Square, Somerville. He enjoyed time spent with colleagues, clients and customers. He served in the United States Marine Corps toward the end of WW II. As he was young, his mother refused to sign for him (her 2 other sons were already serving in Europe), so, at the age of 16, he was signed into the Corps by his sister Irene. George always liked to boast that he had 2 god-mothers; unable to breath after birth he was baptized immediately with god-mother 1; after several minutes of good hard slapping, he breathed his first breath and later at the formal baptismal got god-mother 2, his hard earned first breath to begin his life continues on through his 23 direct descendants (at present). George had a special place in his heart for family, children, the many dogs in his life, even the ones at Wonderland! He rescued several dogs in the latter part of his life and is predeceased by Butch, Lili, Justice, and Queenie. Dad always liked to tell the story of his dog Blackie, who remained at his parents’ after he was married. However, once he had his first child, Blackie would make it his mission to come and watch over the baby, laying under her stroller on the porch, every day until dad returned from work. That was Blackie’s cue to return home, a mile away, solo (no leash laws in those days). Dad also loved music, especially Rock and Roll with the car radio tuned to 103.3 for years.

So it is no wonder that we have chosen in his memory, his love of dogs and Rock and Roll in choosing the Rock and Rescue 501 c non-profit Charity (Bark n Roll – North Reading).

Donations in honor of George can be made to bnR’s Rock n’ Rescue and mailed, dropped off Reading Cooperative Bank at 150 Haven Street Reading Ma 01867, or given at the “Celebration of Life” party in May, 2019.

Share your memories of George, how he may have impacted your life and even stories of time spent with his children under the Condolence section of Boston Cremation.org website.

Friends and family are welcome at “A Celebration of Life” party held on Saturday, May 25, 2019 from 1-4 pm (George’s birthday weekend) at: 186 Woburn Street, Reading,Ma 01867, behind Saint Agnes church. Parking is both on and off street (Woburn even-number side); elevator access available.