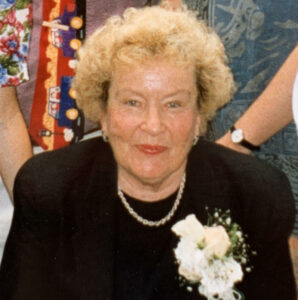 A resident of Lexington and Falmouth, wife, mother and grandmother died peacefully on Saturday, September 19 surrounded by her loving family. “Gerry” was born in Salem in 1925 to Henry O. and Edith (Dane) Phippen. Growing up in Wenham, she attended the Wenham Public Schools until a desire for a bigger school led her to Beverly High School from which she graduated in 1944. After completing her degree from Boston’s West Hill Junior College in 1946 she stayed in the city she loved, sharing Beacon Street apartments with women who became lifelong friends. While working as a secretary for the Chair of MIT’s Electrical Engineering department, she met her future husband Cyril “Cy” Brown, a 1945 graduate of West Point and U.S. Army officer. A graduate student in electrical engineering, Cy left his slide rule in class with the hope that he could retrieve it from the pretty secretary. They married at West Point in 1950, and settled in New Jersey before moving to Versailles in 1951 where Cy reported for duty with the Army Signal Corps. While being a young bride in France was sometimes challenging, it was filled with adventure, travel and new friends. Returning to Fort Monmouth in 1954, they settled in New Jersey for the birth of their first child. Soon after, Cy resigned from the military and began his career with GTE in Waltham, bringing them to Lexington where Gerry lived for the remainder of her life. Three more children and a steady stream of beloved cats followed.

The youngest of four siblings by many years, she was doted on by her beloved Aunt Bessie. She happily recalled their times together, including Bessie teaching her to drive a Packard at age 9 at the Crane Estate. Like others of her generation, wartime memories were poignant and lasting. She was on a high school crew that watched for enemy planes, volunteered at a USO club, and played piano at the Chelsea Naval Hospital.

A devoted parishioner of the Church of Our Redeemer in Lexington, she cherished the fellowship and friendship, and loved working on rummage sales, fairs and soup luncheons. She served on the Property and Search Committees and was committed to the many church missions. She was particularly proud of her multi-year efforts to collect winter clothing and accessories for the homeless women of Rosie’s Place.

Voted “Best Dressed” in high school, her love of clothes and the search for that special something with her friends and daughters never stopped. Trips to Filene’s Basement with the children were always an adventure, ending happily with ice cream at Bailey’s. Returning to the workplace in the eighties, she thrived as a sales associate at Lord & Taylor. Summers changed forever in 1977 when Gerry and Cy bought a cottage in Falmouth. A never-ending source of joy, the house became a place to gather friends, tend her summer garden, and swim at Bristol Beach. Just prior to her sudden decline in health, Gerry was able to spend a month in Falmouth, enjoying the sights and sounds of the place she so treasured.

She was predeceased by her husband and siblings Henry O. Phippen, Joanne P. Marsh, and Richard D. Phippen. She is survived by her four children Richard (Helen Steven) of Simsbury, CT, Cindy (Matthew Elliott) of Framingham, Thomas (Patricia Nolan-Brown) of Wakefield, and Melissa of Roslindale, and 7 grandchildren: Taylor, Molly and Meghan Brown; Jennifer and Rebecca Brown; and Sophie and Christopher Elliott. She’ll be remembered always for her humor and warmth, adventurous spirit, piano playing, and cooking. We’ll miss the cakes, penuche, and hot fudge sauce.

Due to restrictions associated with the pandemic, the family will hold a celebration of her life at the Church of Our Redeemer at a later date.