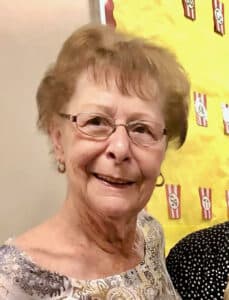 Gertrud “Gert” (Kohler) Pretzler, 82, was born on June 21, 1940, in Regensburg, Germany. She passed away peacefully on December 23, 2022. Gert spent her final days surrounded by her family who showered her with the same love that she gave to them for all the days of her life.

As fate would have it, Gert met the love of her life, Adolf “Spike” Pretzler, while he was stationed in Germany as a soldier in the U.S. Army. In 1958, Gert and Spike married and welcomed their devoted daughter Andrea into the world before moving back to the United States. The following year, their loving son Kurt was born and completed the Pretzler family. Gert and Spike ultimately moved their family to Gloucester, which they would call home for the rest of their days. Gert and Spike remained inseparable through nearly 60 years of marriage until Spike’s death in 2017.

With the assistance of her dear friend Pat Aiello, Gert learned the English language and then went on to earn her American citizenship.

Gert worked in a variety of cooking positions while raising her children, which paved the way for she and Pat to open the Captain’s Lodge Coffee Shop in 1974. Gert later worked at Gloucester Engineering as the Head of Food Service until her retirement in 2004. Gert’s mastery of cooking spanned from traditional German dishes to a superb spaghetti sauce that the guys on the production floor at Gloucester Engineering thoroughly enjoyed!

In 1978, Gert’s pride and joy Dawn Marie was born and Gert earned the title of “Oma”, a name which was synonymous with her amongst family and friends. Gert was later promoted to the title of “Uri” with the birth of her beloved great grandsons, Vin and Sam, whom she loved and adored.

Gert is survived by her daughter, Andrea Tarantino and husband John, her son Kurt Pretzler and his wife Paula, her granddaughter, Dawn Marie McCarthy and husband Michael, her great grandsons, Vincent and Salvatore McCarthy, as well as her brother Kurt Kohler and his wife Lilo. Gert is survived by many nieces, nephews and friends, particularly her dear friend Priscilla Cunningham.

Gert is predeceased by her husband Adolf Pretzler, her parents Franz and Katarina Kohler, her sister, Charlotte Kohler, her in-laws Thomas and Clara Yeatman, and sister-in-law Nellie Yeatman.

Gert will be remembered for her strong will, her devotion to her family, and her unyielding love for those dearest to her.

In keeping with Gert’s desire to never be the center of attention, there will be no services. In lieu of sending flowers, Gert would have told you to put flowers on your own table at home to remember her by.