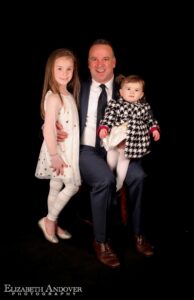 Glenn Michael Koehler, 49, of Wakefield, MA, passed away on 1/1/23 after a brief illness. He was greatly loved by his family, friends and many that knew him.

Glenn was born on February 17th, 1973 to parents John Koehler and Marie Boyce (formerly Koehler)  in Metuchen, NJ. After Glenn graduated from South New Berlin Central School in 1991, he went on to study Business Administration at the State University of New York at Plattsburgh.

Glenn had a lengthy career in the banking industry, with much of his career, 22 years, spent working on a trading desk for State Street Bank in Boston, MA.

Glenn had a very big heart and was passionate about spending time with his daughters, Samantha and Stella, his extended family, and his friends. He also greatly enjoyed time at the Cape in the summer, family reunions at Saratoga and taking trips out to South Bend, IN, with his “ND crew” each autumn.

He loved “his” Dallas Cowboys and Boston Red Sox. You could always engage Glenn in a spirited discussion about his teams and their fortunes. He also enjoyed camping and fishing, since he was a young boy growing up in rural, upstate New York. Glenn had great charisma and was always a focal point of gatherings with his friends and family.

A “celebration of life” ceremony will be held in the Wakefield, MA area in the near future.  In lieu of flowers, the family requests donations be made to help provide a college fund for his young daughters. Please see this GoFundMe link