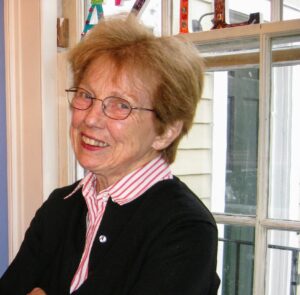 After a long and courageous battle against old age, Helen (Jinx) Crouch finally succumbed on
February 28 at the age of 90. Beloved mother and mother-in-law of Jean Crouch Ricci and her
husband Robert; Thomas Crouch and his wife Pamla; Becky Crouch Barrentine and her
husband Curt; and Brad Miller. She was predeceased by daughters Nancy Crouch Clark and
Amy Crouch Miller. Jinx also leaves 11 grandchildren and two great-grandchildren.

Born in Chicago, Jinx moved to Rochester, NY, graduated from the University of Rochester
(UR), and settled there. She later moved to Cazenovia, NY with her family where she lived for
close to 40 years. Divorced, she raised five children on her own. Starting in Rochester and
throughout her years in Cazenovia, she devoted herself to improving and furthering mental
health care, women’s reproductive rights, and adult literacy among other causes. She was an
active volunteer in and leader of many non-profit organizations, including the Health Association
of Rochester and Monroe County (NY), the National Council of Alcoholism, the Monroe County
Mental Health Association, the Volunteer Bureau of the Rochester Council, the Junior League of
Rochester, Planned Parenthood, UR Alumnae Association, the League of Women Voters, the
National Coalition for Literacy, English at Large, and Literacy Volunteers of America where she
held positions of volunteer through Executive Director over the course of nearly 30 years.

Jinx was the recipient of numerous awards and appointments based on her dedication to these
causes. Among those are the UR’s Fannie Bigelow Alumnae Award (1971) for demonstrating a
deep sense of civic responsibility; founding member of the American Bar Association Task
Force (1986) on Literacy to develop literacy outreach programs for prison populations; winner of
the first annual Harold W. McGraw Prize in Education (1988) given to honor those with a lifelong
commitment to education and finding innovative ways to further its delivery along with the
Former US Secretary of Education Terrel Bell and Senator Claiborne Pell of RI; UR’s Charles
Force Hutchison and Marjorie Smith Hutchison Medal (1989), the University’s highest honor
given for outstanding achievements and notable service to community, state, or nation;
appointed by President George H.W. Bush to the first National Institute Board for the National
Institute for Literacy (1992). She was also a charter member and past Chairman of the National
Coalition of Literacy.

Jinx moved to Lexington, MA in 2006, where she has been supported by family, caring doctors,
friends old and new, and by a neighborhood of open arms, homes, and hearts. She was an
extraordinary woman and will be missed.

A memorial service will be held on Saturday, March 16, 2019 at 2:00 PM at The Church
of Our Redeemer, 6 Meriam Street, Lexington MA, reception immediately following. In
lieu of flowers, share some one-on-one time with an elder or make a donation in Jinx’s
memory to Planned Parenthood Federation, The Children&#39;s Room of Arlington, MA, or
a charity of your choice.