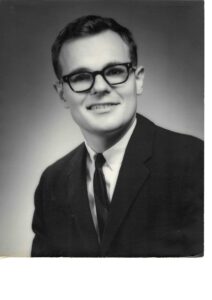 Hubert F. “Bert” Sadowski, died on December 2, 2020 after a long-standing battle with Parkinson’s disease. He was born in Detroit, Michigan on April 14, 1943 to Dr. Hubert Steven Sadowski and Helen (Jaworski) Sadowski Barcalow. He graduated from the University of Detroit Jesuit High School in 1961 with honors, and University of Detroit College in 1965.

He was the third generation in a line of 4 physicians, graduating from Wayne State Medical School in 1969. He moved to Pittsburgh to complete his residency at Allegheny General Hospital, and was Chief Resident at West Penn Hospital, transitioning to a life of private practice in internal medicine in Mt. Lebanon at St. Clair Hospital. He was a founding member of Premier Medical Associates, which has grown to over 10 locations with 100 providers. He was a devoted physician to his patients, and found strength in the medical community, many of whom became close lifetime friends.

Before his passing, he moved from Pittsburgh, Pennsylvania to Sudbury, Massachusetts to be closer to family. He died at home, and to the end showed his strength and wit.

He was a quiet man, passionate gardener, student of American history, faithful husband, devoted father and stalwart friend. He will be missed by all who knew and loved him.

Due to the COVID-19 pandemic, a funeral will be postponed until spring/summer of 2021.