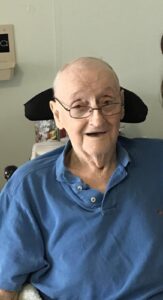 Hugh F. “Scooby Doo” Collins passed away on September 15, 2017 after his long battle with congestive heart failure, COPD and AFIB. Hugh would brag to anyone who was willing to listen that although he had only 2 hips, he had 3 hip replacements, survived colon cancer, a stroke and the disease of alcoholism. He celebrated his 86th birthday on August 25th surrounded by his family.

Hugh has been reunited after 19 years with his late wife, Janet A. (Weimert) (Cavalieri) Collins. Hugh and Janet were married in 1953 and after divorce and a long separation, they were reunited again in 1979 and remarried in 1983. Hugh is now forever with his one true love. He also joins his late parents Francis and Theresa (Riley).

Among those who will hold him forever in our hearts until we too are reunited include his daughter, Virginia McGoldrick and husband Eddie, son Frank and wife Theresa, and his step daughter Fran (Cavalieri) Collett. He was a loving Grandfather to Audra (McGoldrick) Tango and her husband Nick, Melissa McGoldrick, Brianne (Collins) Willey and her husband Jason, Matthew Collins and Kerri and Lauren Collett. He loved all his family, and for the past 10 years, his greatest joy was being “Great-Grampa Scooby Doo” to Krystal Tango who made him smile whenever he thought of her. Krystal and “Scooby” shared popcorn, cookies and ginger ale often from his favorite vending machines.

Hugh was a retired cook who loved spaghetti, popcorn and sweets and dogs (especially Rusty and Obe McCarthy who were frequent visitors.)

Hugh’s family will greet friends at a memorial gathering at Woodlawn Cemetery in Everett, Massachusetts on Monday, September 25th, 2017. Everyone will meet at the chapel in Woodlawn Cemetery at 10:45 a.m. and proceed together to the graveside. A committal service will follow at 11 a.m.