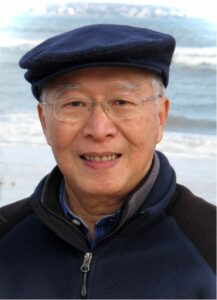 He was born on December 11, 1939 in Hangzhou, Zhejiang Province to Chi-Tsy and Pei-Xiang Huang, the third of four sons.  In 1949, his family fled to Taiwan, eventually settling in Taipei, as his father took a position of confidential secretary to Chiang Ching-Kuo (son of Chiang Kai-Shek), who eventually served as President of Taiwan in 1978.

I-Ning attended the esteemed National Taiwan University, where he studied psychology.  This was followed by compulsory military training.  It was during this time that he fell in love with Hwai-Huey Hsu, a fellow psychology student from NTU.  In 1962, I-Ning and Hwai-Huey got engaged days before he left for graduate study in the US at New Mexico State.  After completing his master’s degree in 1964, the two were reunited when I-Ning joined Hwai-Huey as a fellow graduate student at the University of Texas-Austin.  They married before a judge in Travis county court in Austin that July.  In 1965, they welcomed their first son, Kuang-Yu.

I-Ning received his PhD in Psychology in 1968.  Although the young family had initially planned to return to Taiwan after getting their degrees in the US, the parents from both the Hsu and Huang families strongly suggested they stay and raise their family in the United States for a better life. This led I-Ning to join the faculty of the psychology department at the University of Wisconsin-Whitewater, where he would continue to teach until his retirement in 2000.

In the following years, two more sons were born:  Kuang-Hao in 1970, and Kuang-Hung in 1973.  I-Ning excelled as a teacher and was quickly promoted to full professor.  He was awarded the W.P. Roseman Award for Excellence in Teaching in 1983.  He was also an active researcher, maintaining a lab (which led to many trips with his young sons to feed the rats) and publishing numerous articles in the area of experimental psychology.  Knowing firsthand the difficulties of being a foreign student, I-Ning helped generations of international students at the university acclimate to life in a small town in Wisconsin, regularly inviting them over for big meals and games over the holidays.

In 1981, Hwai-Huey passed away after a long bout with cancer.  After this great loss, I-Ning poured himself into raising his three sons, while continually teaching, researching, cooking and upkeeping a household.  Despite his busy schedule, he soon rediscovered love.

I-Ning was introduced to Joyce Leung through a mutual friend.  Because Joyce worked as a librarian at Bridgewater State University in Massachusetts, the two actively corresponded through letters for two years.  In 1985, the two married, and Joyce joined I-Ning in Whitewater.

When the sons left home, I-Ning’s life became filled with tennis and card games with friends, as well as with a long term project of compiling a family tree and translating a family history written by his father.  He and Joyce continued to host international students from the university, and with an influx of young faculty from China and Taiwan, they welcomed these new faculty and their families into their lives as well.

These years were also filled with numerous travel adventures for I-Ning and Joyce.  From the Pyramids of Egypt to sections of the Silk Road in Xinjiang Province in China where they rode camels and ate exquisite grapes, they made annual trips for the next two decades.  They were often invited to visit their extended “family” of international students, who now span the world.  Although partial to taking cruises (which limited the amount of walking required!), I-Ning enjoyed visiting places of historical significance and identifying elements of Chinese culture in non-Chinese parts of the world.

After the births of his grandchildren, I-Ning relished every opportunity to spend time with them.  Although the grandkids all lived in the Chicago area, he would eagerly drop everything and make the two-hour drive to serve as emergency babysitter.  As they got older, weekend visits to Whitewater were filled with card games, fishing, tennis, and lots of the kids’ favorite foods.  He would spoil them in ways unrecognizable to his own sons.

In 2010, I-Ning and Joyce retired to Medford, Massachusetts, where they would enjoy regular Tai Chi classes in Fellsmere Park, great Chinese food and seafood, and the offerings of Boston’s many cultural and educational institutions. And because they lived in a condo, I-Ning would never again have to shovel snow.

I-Ning will be remembered for his generosity, humility, humor, honesty, and integrity– as someone whose actions spoke louder than his words.