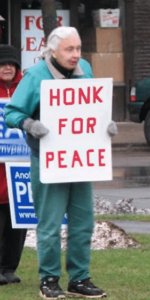 She was born July 2, 1927, in Jackson, Michigan, to parents Charles F. Kellers and Elizabeth Acheson Kellers, and grew up in Montclair, NJ. Ibby graduated from Swarthmore College, where she embraced the Quaker values that inspired her throughout her life. There she met her life partner, A. Duncan Chiquoine. The two were married in 1950.

Ibby earned her Master’s degree in microbiology from Cornell University, and she and Duncan proceeded to raise a growing family in several college towns—Princeton, NJ; St. Louis, MO, and Clinton, NY—where Duncan’s teaching positions led them, finally committing to Clinton NY where she could be near her sister, Berty and keep the cousins close.

While raising 5 children (Stephen, Christopher, Timothy, Kenneth, and Katherine), Ibby seized on opportunities to support the schools and the community, and make the world a better place. For her, it was never enough to simply hold a belief; turning beliefs into action was her guiding principle.

Her family recalls that she never slept. She was up when they awoke and when they went to bed—whenever that was. Most mornings, Ibby could be found in her garden, in her study keeping up with all of the news, or at her desk writing letters to government officials at all levels to encourage them to take action for equality and peace.

She volunteered each day (walking wherever she went), sharing her love for learning and reading with the children at Clinton Elementary, at Sunday school or at peace camp. A weekly Peace Vigil on the town green, teaching sexuality education at Planned Parenthood and at the high school, and engaging prison inmates in conflict resolution were also part of her routine. In between, she served on boards and actively worked for decades for the values and organizations that she felt could make a difference: The Jack Boynton Pool in Clinton, The League of Women Voters, and the Quaker Meeting—to name just a few. As busy as she was, Ibby was always there for her family; she was up for whatever her children and grandchildren wanted to explore, and quietly led us all to be better people by her example.

Ibby lived simply, was down-to-earth, patient, and persistent—not a Pollyanna—but a hope-filled person who was in it for the long haul and believed deeply that change is possible. In everything, she was guided by her profound belief that there is a light within each of us.

Ibby is survived by her daughter Katherine Stamm and husband John-Paul, her sons: Stephen and wife Eleanor, Christopher and wife Nancy, Timothy and wife Jody, and Kenneth and wife Selinda. She leaves 9 grandchildren and 1 great grandchild. She also leaves her sister and brother-in-law, Bertha and William Morehouse, and sisters-in-law Jean Chiquoine and Ada Kellers. She was predeceased by Duncan, her husband of 65 years, and her brother C. Frederick Kellers.

Our family wishes to thank the kind and engaging caregivers at Nashoba Park in Ayer, where Ibby lived for the past two years.

Ibby was passionate about making this world a better place. To honor her, our family encourages people to work wholeheartedly for the causes they believe in. If you would like to contribute to causes that were important to Ibby, please consider a gift to The Clinton Youth Foundation, PO Box 32, Clinton, NY 13323, The American Friends Service Committee, 1501 Cherry Street, Philadelphia, PA 19102-1403, or UNICEF, 125 Maiden Lane, NY, NY 10038. On-line messages for the family may be left by clicking below.