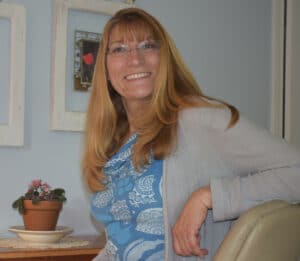 On Wednesday, August 3, 2022, Jacqueline Wiant Page, loving wife, treasured sister, beloved aunt and devoted friend passed away at the age of 55 after a 3-1/2 year battle with ovarian cancer.

In 1986, while at SUNY Oswego, Jackie and her future husband Mike met.  They quickly became best friends, and were married August 1, 1992.  Mike and Jackie made a great team, and enjoyed a rich and meaningful life together living in Syracuse, N.Y., Pittsburgh, P.A., and eventually Chatham, M.A.

Jackie was known for immense creativity, her love of nature, animals, and people as well as a positive funny attitude.  Vacations often were in quiet wooded settings or on the water where she could observe wildlife for hours each day.  She always had several pets that were both loved and spoiled.  In her neighborhood she was known for bringing people bouquets of flowers or something she baked, and shoveling driveways after a storm.

A celebration of Jackie’s life will be held on September 17 at 2 pm at her house at 9 Ethelma Dr, Chatham, M.A..  Donations to honor Jackie can be made to your local no kill animal shelter.