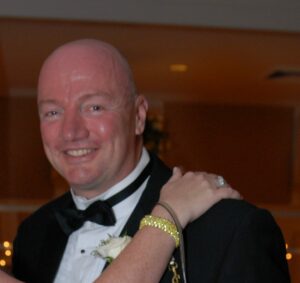 James K. O’Brien, beloved husband, son and brother, age 58, passed away unexpectedly at his home in Everett, Massachusetts on Wednesday, May 19, 2020. James, known as “Jim” or “Jimmy” to his friends and family, was born on May 23, 1961 in Lynn, Massachusetts to James E. O’Brien and Norene T. O’Brien. Jim, along with his two sisters, Kim-Marie (O’Brien) Phelan and Nerine (O’Brien) Sullivan, grew up in Marblehead, Massachusetts, which helped foster Jim’s great love of the ocean. Growing up in Marblehead, Jim enjoyed outings in the summer on his beloved Donzi motor boat, along with scuba diving and fishing. During his younger years, Jim’s mother would often refer to her son, Jimmy, as “Huck Finn”, as Jimmy, along with his childhood friend, John Perry, would often go off on local “adventures” that would always result in great stories to tell friends and family, and at times a visit to the “ER”. Jim was also a proficient skier, car and motorcycle enthusiast, enjoying rides on his Harley and drives in his Dodge Challenger automobile. Jim was a builder by trade, working along with his Father, James E. O’Brien, building custom homes on the North Shore. Later, Jim became a member of the Carpenters Union, where he finished out his career.

Jim met the love of his life and his best friend, his wife, Faith (Morelli) O’Brien back in 1995. Faith and Jim thereafter married on June 7, 2000 and were about to celebrate their 20th wedding anniversary this June 2020. Jim and Faith resided at their home in Everett, Massachusetts, along with Jim’s beloved rescue dogs, “Chico” and “Daisy” and Faith’s niece, Celeste Morelli. Jim and his wife, Faith enjoyed spending time with family and friends, traveling and dining out together as a couple.

Jim was an extremely loving and caring individual, with an engaging smile and infectious personality, who was beloved by all who knew him. Jim will be greatly missed and remembered with deep affection by his friends and family. In addition to his loving wife, Faith, Jim is survived by his mother, Norene O’Brien of Marblehead; his son, James John Wright of Burlington, VT.; his sisters: Kim-Marie Phelan of Marblehead and her husband, Mark O’Connor and Nerine Sullivan of Andover and her husband Timothy Sullivan; his nieces and nephews: Brittany O’Neil, Joshua O’Neil, Patrick Phelan and Timothy John Sullivan, Jr. Jim is predeceased by his father, James E. O’Brien.

In Lieu of flowers, donations may be sent to the Northeast Animal Shelter, 347 Highland Avenue, Salem, Massachusetts 01970.