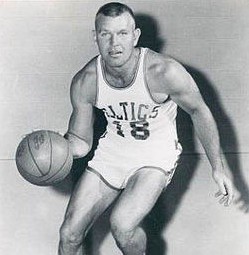 James Loscutoff Jr., of Andover, Mass and Naples, Florida passed away December 1, 2015 at Lahey Clinic of complications from Pneumonia with Parkinson’s. He was 85 years Old. Jim was also known as “Jungle Jim” and “Loscy”, of Boston Celtics fame as well as “ Big Jim” and “Coach”. Born February 4th 1930 to James and Nellie Loscutoff, in San Francisco California. He attended Palo Alto High school, and after graduating went on to Sacramento Jr. College. Jim was always an avid athlete. He was recruited by the University of Oregon where he became a west coast basketball record holder, some records he still holds to this day, and he was later chosen a member of the PAC ten. He served in the Army at Fort Ord, California, and continued to play as a star basketball player for the armed services He then returned to the University of Oregon to complete his degree. At this time he met and married Evelyn ( Lynn) Leon of Redwood City, California. He caught the eye of Red Auerbach and was chosen as first draft pick for the Boston Celtics in 1956. He went on to play for 9 years during the Celtics Dynasty as “The Enforcer” and helped to carry them to 7 world championships. His nickname “ Loscy” still hangson a banner in the rafters of the Boston Garden today. He retired in 1964 from the Boston Celtics, to become professor of physical education at Boston State College and head coach of their basketball team, inspiring future athletes. At that time, he and his wife, artist, Lynn moved to Andover Massachusetts where they founded Camp Evergreen in 1964, a children’s day camp. Children from the area continue to thrive from the Camp Evergreen beneficial camping experience. The camp continues today under the direction of their son “ Little” Jim with his wife Debby Loscutoff.

In 1990, Lynn and Jim chose to retire to Naples Florida where they spend their winters but continue to spend summers in Massachusetts.