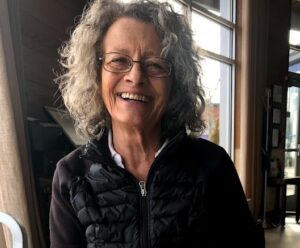 Janet Sullivan Golub, born Janet Lou Hecht, to Jack Hecht and Camille Hecht Hemminger on August 5, 1944, in Joplin Missouri passed away peacefully with family present on May 4, 2022 at age 77 after struggling with dementia for many years.

A loving mother, an entrepreneur, a poet, a desperado, and above all a chaser of dreams.  Janet was a force of nature with an indomitable spirit who never hesitated to roll up her sleeves to attack an obstacle. Janet was not one for compromise. When she had a goal in mind, you either helped or got the hell out of her way. With this mindset, she wrote a beautiful book of poetry, started her own businesses, restored, and redesigned homes. She relocated to Florida, hating the cold winters of New England, but when her grandchildren were being born she didn’t hesitate to high-tail it back to be a devoted and present Nana.

Janet was a proud grandmother who loved spending time with her grandchildren and was happiest when ‘digging in the dirt’ (her garden) or buried in a book.

Janet is to be cremated and interred to “Mother Ocean ” to join her beloved Bill.