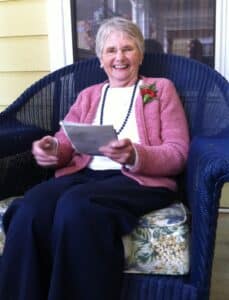 Jean Diamond passed away peacefully at Concord Park on October 17th at the age of 95, after a period of declining health.

Jean was born in 1927 in Brooklyn, New York to Yetta and Eugene Schaffer and later moved to Washington Heights, New York. Her father emigrated from Poland and her mom was born in Brooklyn. Some of Jean’s family were killed in the Holocaust and some escaped, later joining the family in New York. Jean married Evan Diamond, had two daughters, Amy and Laura, and raised her family in Plainfield, New Jersey.

The race riots of 1969 deeply affected Jean. That experience and a favorite civics teacher were catalysts to her becoming a lifelong proponent of social justice. She went on to be a civil rights advocate, a fair housing tester, and a member of the Mayor’s Citizens Advisory Council. She frequently had community members and neighbors over to her home to try to bring people together and understand one another. When her children were young, Jean served as PTA president, president of a co-operative nursery school, and ran an after-school play group in a black community.

In anticipation of her divorce, Jean got a job as a secretary for Baker and Taylor, a division of W.R. Grace and eventually became the facility manager of a new 50,000 sq. ft. building.

When Jean retired, she moved to Keene, New Hampshire to be near her daughter, Amy, Amy’s husband and her grandchildren. She became involved in politics, took classes at Keene State College, and worked in the Adult Tutorial Program. Jean was part of a “Dissenters” group of local folks and college professors who met on a regular basis and had robust political discussions. She organized a forum on the criminal justice system at the local library and sat on the board of the Keene Community Kitchen. Its purpose was to feed the hungry.

Jean moved to Concord in 2010 to be close to her daughter, Laura. She was active in Coffee and Conversation at the COA. When she had multiple health challenges, she moved to Concord Park where she resided for nearly 11 years. She enjoyed weekly current events, exercise programs, entertainment, and shared her opinions regularly at the monthly Round Table meetings. She often commented that Concord Park added years to her life.

Our family is grateful for the kind and compassionate care of the staff of Concord Park, her devoted caregivers Michelle, Marie France and Suzette, and the team at Care Dimensions Hospice.

Jean is survived by her daughter Laura Diamond and her wife Carolyn McDonald of Stow, MA, and her daughter Amy Diamond Barnes and her husband Davis of Wilmington, NC; her two grandchildren, Jared Barnes and his wife, Olivia of Jamaica Plain, MA and Katie Thompson and her husband Norman of Cross Junction, VA; and her four great grandchildren, Vex, Adley, Brianna and Trey. Jean was predeceased by her sister Sandra Rogovin.

A celebration of Jean’s life will be held at the Concord Council on Aging, 1276 Main St, Concord, MA (for GPS and parking, use 55 Church Street) on October 29th at 11:00 AM, followed by a luncheon. In lieu of flowers, if you feel moved to make a donation in Jean’s honor, please consider her favorite charities; Doctors Without Borders and the Southern Poverty Law Center.