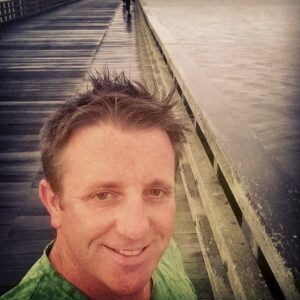 Alan grew up in the Lotabeg neighborhood of Cork City. He enjoyed great adventures with his
childhood (and lifelong) friends James, Virgil and Troy, as they roamed the woods and city
streets with Rusty, the Irish Setter. He went on to live in the historic port of Kinsale, working as
a commercial fisherman from 1991 to 1996 on a 60-foot South Atlantic trawler, moving through
the ranks as Deckhand, Boat Engineer, and finally to Skipper. He left to pursue a certification in
welding and fabrication. During this time, he also worked as a bartender at The Greyhound, one
of the oldest bars in Ireland, lighting up the faces of all who entered.

While in Kinsale, he met his future wife, Mariah, who had come to Kinsale from America and
was working at a neighboring restaurant. They left Ireland together, moving to New York City
briefly and then to the Boston, MA area. He worked for 18 years at Metal Matrix Cast
Composites, starting as a Production Assistant and eventually becoming Plant Manager. Alan
attended night classes studying Design Engineering at UMass, receiving a Certification in Design
and Manufacturing. He worked for Parker Hannifin, where he oversaw the tear-down and
integration of their Boston plant to a new facility in North Haven, CT. Most recently, Alan
worked at GE Aviation in Lynn, MA, where he was Maintenance Leader.

His passions were sketching and painting, music, nature, and animals. He and his wife loved
traveling, making trips back to Ireland, living in Rome, Italy for nearly a year and visiting many
other areas throughout Europe and the U.S. While living in Rome, he would often have his
sketch book in hand to capture the sights; he couldn’t get enough of John Denver’s song Rocky
Mountain High; and while traveling in Texas and Wyoming, visits included the local animal
shelters to walk a dog with an “Adopt me” vest. Hiking with his wife and dog, sitting at a café
with a coffee and crossword puzzle, and finding any way to be near the ocean, including taking
his truck “over sand” on the National Seashore of Cape Cod, were just a few of his favorite
things to do. He felt deeply and loved to bring joy to those around him with his big smile and
hearty laugh, whether it was through practical jokes or thoughtful and meaningful small gifts
for friends, family and co-workers.

Alan left us too soon. Please remember Alan by waking up to each new day with gratitude,
hope, and an appreciation for the little things in life. That is truly how Alan lived – with love for
life’s simplest pleasures and making others happy.

Alan is predeceased by his parents, Desmond and Eileen Torpey of Cork;
He is survived by his heartbroken wife of 23 years, Mariah (Tocci) Torpey of Somerville, MA and
their Australian Shepherd, Roger. (Before Roger, they were dog parents to Kelly, a beloved
Labrador Retriever.) In addition to his wife, he is survived by his older brother Glenn Torpey, his
spouse Karen, and nieces and nephew Ellen, Mark and Susan; his sister Orla Torpey Thacker and
her spouse Martin; his mother-in-law Katie Tocci; his father-in-law George Tocci and spouse
Alison; his brother-in-law Nat Tocci, spouse Sanya, and nephews Cooper and Zach; and brother- in-law Sam Tocci. He also leaves behind many loving aunts and uncles, cousins, friends and colleagues, including his very special family of friends from Silver Heights Avenue in Cork, Ireland and Kinsale, Ireland, whose lives were enriched by knowing him.

Sometime after the Covid-19 restrictions have been fully lifted, a memorial gathering will take place.