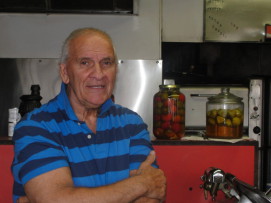 Joe LaCreta “Big Joe” passed away on June 30th. Joe was born in Somerville, 1934 and moved to Wilmington with his immediate family and later moved to Reading where he resided until he died. Joe lived a pretty full life, he grew up on the family farm and after attending WilmingtonHigh School he joined the Marines, and fought in Korea. Joe was a dedicated soldier an excellent marksman and sharp shooter. After being honorably discharged, Joe was called upon to work as a body guard for many including Robert “Bobby” Kennedy. Joe became a policeman for the town of Wilmington and also was active in Professional wrestling. Known as “Big Joe LaCreta” His sparing partner was the late Killer Kowalski “the claw”. Wresting open many doors for Joe including television and movies. His television commercial credits include Pepsi and Tidy Bowl and acting roles as a bounty hunter in Steven Spielberg’s 1975 “Jaws”, an arresting office in the 1973 film “The Last Detail” with Jack Nicholson and Randy Quade, he was also in the 1973 crime film “The Friends of Eddie Coyle”, “A Small Circle of Friends”, “The Fuzz” and the 1972 Television Series “Banacek” starring George Peppard. Joe owned and operated many pizza and subs shops but his pride and joy was “Big Joes” at the train station in WilmingtonCenter. He not only made the best pizza and subs in town but he was also a major source of entertainment and a friend to all. He could get you laughing no matter what was going on in your life, and would serve you some of his homemade wine from the back room, he’d play his organ for your and bust your chops at the same time. He could certainly snap you out of what ever mood you were in. His favorite thing to do was playing golf at Cedar Glen in Saugus with the guys he had A lot of laughs and a lot of good golf. He also loved to cook, and took great pride in his vegetable garden each year along with his flowers and herbs. Joe was also musically incline and would love to entertain you while playing drums, harmonica and organ. He was a gifted guy with lots of personality, a colorful character, survived by his longtime girlfriend Barbara Smith many family and friends. He will be greatly missed.