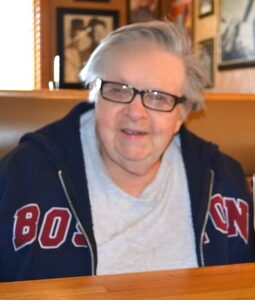 Johann P. O’Brien entered into rest in Salem, Massachusetts on May 22, 2016. She was born in Boston, Massachusetts on April 15, 1937 daughter of Evangeline (Qualey) O’Brien and James R. O’Brien. She attended Lynn, Public Schools and resided in Lynn, Massachusetts most of her adult life until entering adult foster care where she resided with Veann and the late David Campbell, with whom she became close friends. Most recently due to failing health, she resided at a Bridgewell Residence in Wakefield, Mass.

Johann worked for many years at the Triangle Sheltered Workshop in Malden, Mass., where she was at one time awarded Worker of the Year for her outstanding work and participation, as well as for a short period, at a Morgan Memorial Workshop in Beverly, Mass. She was well known and loved at the Peabody Senior Center where she enjoyed playing games and passing out and eating the daily donuts!

Johann loved bingo, making cards on her computer, crocheting lovely afghans and clothes hangers, doing crafts and playing games on her computer. She loved going to many different restaurants and watching the Lynn Christmas Parade on Christmas Eve.

Johann leaves her brother James O’Brien and his wife Carolyn, of Lynn, Massachusetts who cared for her for many years, her brother John O’Brien of Orlando, Florida, four nephews, Matthew, Andrew, Jeremy and Jeffery and several great nieces and nephews.