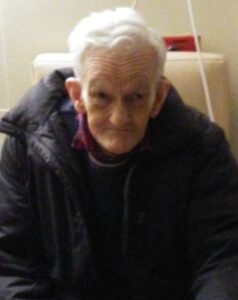 John J. “Jack” Mazgay a former resident of Newman Avenue, Seekonk died Sunday, April 26th at Life Care of Attleboro having received the Sacraments of the Church. Jack was born and raised in Seekonk and resided there until four years ago when he moved to Life Care of Attleboro.
A long time Parishioner of Our Lady of Queen of Martyrs in Seekonk Jack was blessed with a devotion to Our Lady and will be missed for his personally hand-written Christmas cards, Jack being Jack and of course his world renowned Polish stubbornness that was nearly as great as the kindness in his heart.

He was predeceased by his parents Jacob and Magdalena (Tokarz) Mazgay, his siblings Adella Stefanik, Jane Pendry, Stella Pollock, Walter, Mary, Mildred and Edna Mazgay. He is survived by his brother Stanley of Nashua, NH and many nieces and nephews.

He will be buried with his siblings at a private family graveside service at a later date. Any wishing to honor Jack may make a donation to Our Lady of Queen of Martyrs, 385 Central Avenue, Seekonk, MA 02771.