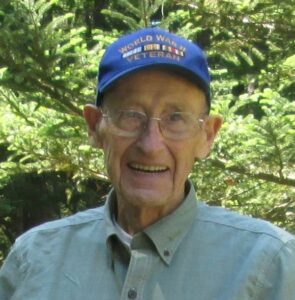 Joseph Abraham Barrows, 93, of Lunenburg, Massachusetts died on June 26, 2017. He was born in Leominster on February 29, 1924. The son of Homer and Cora Mae (Cutting) Barrows, he was raised on his grandfather’s farm in Leominster. A veteran of the Navy, he served his country in World War II in the Armed Guard. Following the war, he married Phyllis (Kohlstrom) Barrows. They built their home and raised their family in Lunenburg. Joseph was employed at Simonds Saw and Steel in Fitchburg for 41 years and retired in 1986. His smile, positive attitude, and welcoming nature were inspiring to family and friends. Nothing meant more to Joseph than his family. He especially enjoyed watching his children and grandchildren in their concerts and sporting events. Hosting family and friends for the holidays gave both Joseph and his wife great joy. His vast appreciation for music, history, and nature knew no limits. Joseph’s favorite pastimes included skiing (well into his seventies!), camping, feeding the birds, and decorating his yard for the holidays.

He is survived by his wife of 70 years, Phyllis Barrows; his son Robert Barrows and wife Meg Barrows of Peterborough, NH; son Russel Barrows and wife Sandra Barrows of Winchendon, MA; daughter JoAnn Lyon and husband Donald Lyon of Littleton, MA; and son Kelly Barrows and wife Linda Barrows of Westminster, MA. He was predeceased by his son Michael Barrows of Granby, Quebec, Canada. He had two brothers Ernest and Herman Barrows who predeceased him. He is also survived by his many grandchildren and great grandchildren, a sister in law Ruth Barrows, brothers in law Rudolph Kohlstrom and Robert Kohlstrom, and many nieces and nephews.

He will be buried in the Evergreen Cemetery in Leominster, MA. Burial will be private. Contributions in his memory may be made to: Daily Bread c/o 36 Rosewood Drive Leominster, MA 01453.