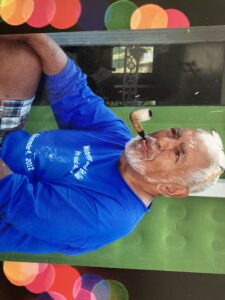 Joe Oteri died peacefully at his home in West Newton on November 22, days after celebrating his 90th birthday. His life, however, was rarely peaceful but gratefully filled with fellow criminal trial lawyers (certifiable), page one criminals (allegedly), a big Sicilian family (loving, naughty) and a loyal cast of Marines (the best of the best).

Raised in Southie by his mother, Pauline Zangla Oteri, he attended BC High, BC and BC Law. Triple eagle (actually three-quarter eagle). He had a ‘beef’ with a classmate, threw a punch, the guy ducked, and the hit landed on a Jesuit priest standing behind; thus, senior year at Cathedral High. Joe enlisted in the Marines on his college graduation day and drove to Parris Island for boot camp. Though he wanted desperately to lead troops in battle, his superiors pulled him off the ship to Korea making him a JAG officer. This led him to BC Law. His divorce lawyer days ended when shot three times on the steps of the courthouse by his client’s husband, a Boston cop, who proceeded to shoot his wife then himself.

His legal career spanned 70 years, worldwide. He appeared on the original PBS ‘The Advocates’ with many appearances on ‘Good Morning America.’ ‘The Joe Oteri Show’ earned him a Peabody award. He always intentionally said the most outrageous things on air, knowing that the audience wanted a rascal, not a bore…bleeps galore. Though TV appearances entertained him, trial law captured his heart and mind. He tried the first case to legalize marijuana in 1967 and won an acquittal in the first case to use PTSD as a criminal defense in 1980. Juries presented the greatest thrill and challenge, and he charmed them one by one leading to many dozens of jury acquittals and a well-earned reputation as a legendary criminal defense lawyer. He argued twice before the Supreme
Court of the United States.

Joe’s generosity, intelligence combined with street smarts, kindness (unless he didn’t like you), sense of humor and story-telling talent were legendary. A dyed in the wool democrat, he bragged of his love for Bill Weld (R) and support for Charlie Baker (R). He wanted his epitaph to read “he’s got no change coming.” His favorite words contained four letters.

Among the large family he adored and who will forever love him, are his wife Debbie Sampson (he was her world), his daughter Paula Mulcahy (Paul Mulcahy), his grandchildren Jacklyn Ward Frontiero (Dave Frontiero), Catherine Mulcahy, Andrew Mulcahy and his great-granddaughter Elliana. He was predeceased by his first wife Ann Driscoll Oteri.

He was larger than life, and his escapades will be rehashed and celebrated in 2021 with Bombay Sapphire martinis (no more than 2 each!) and Pasta E Fagioli from Limoncello. Please give to your
favorite charity in his memory or to St. Jude Children’s Hospital. For online condolences, please visit www.bostoncremation.org