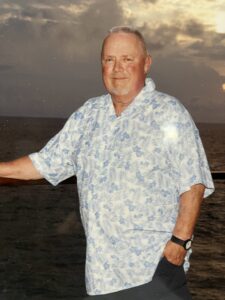 Joseph W. White of Norton passed away after a short illness on January 7, 2022. Joe was 69. He is the
son of the late Melvin and Shirley (Twombley) White, of Nottingham, NH. A veteran, he served in the
United States Navy, and served his Country in Vietnam.

Joe is survived by his loving wife and best friend, Ilesa (Kline) White and his cherished children, Noah
White, Tammy Stevens and Jessica White. He was the beloved brother of Lisa (White) and Carl Nadeau
of Nottingham, NH. He was also an adored grandfather by Courtney, Caden, Bailey and Ripley. Joe is
also survived by many nieces and nephews.

Prior to retirement, Joe worked as a Private Investigator and was a former member of the LPDAM.
While Joe’s work was his greatest passion, his most important time was spent with his family. You could
always find Joe on the baseball field, basketball court, football field or Boy Scout den. Never failing to
lead Noah and the Norton boys to successes. Joe made many friends along the way; and ruffled a few
feathers as well!