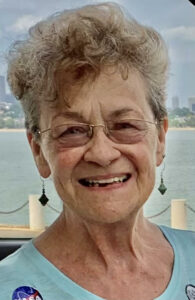 Judith (Judy) Lynne Gillis, age 78 of Tremont Street Lynn passed away unexpectedly in her home on
December 5 th , 2021. Born and raised in Lynn, Judy was the beloved daughter of the late Donald Stark
and Ethel (Mansfield) Stark. She was a graduate of English High School class of 1960. A lifelong resident
of Lynn, she grew up and spent many of her adult years on Locust Street. She worked as a Pharmacy
Assistant at Berridge Pharmacy on Chestnut Street for several years. She left Lynn briefly in 1978 for
New Hampshire as partner in the Remmick Propane gas business in Tamworth. In 1982 Judy returned to
Lynn where she joined her sister Carole Bannister, selling craft supplies and holding craft classes out of
Carole’s basement on Locust Street. Not long after, Judy and Carole opened “The Craft Market” on
Broad Street in Lynn. Eventually moving the business to Union Street in Lynn, The Craft Market became
the premier destination for craft supplies and classes on the North Shore. It was during her time
managing The Craft Market, Judy realized her talent and passion for floral design. This passion led her
to roles as the lead floral designer at several Boston and north shore establishments, including several
beloved years with Peter Barter Florist on Pickering Wharf in Salem. Eventually landing as the lead
designer at Michaels crafts store where she was eventually forced to retire due to heath reasons. It was
at this stage in her life she was fortunate to meet her soulmate and the love of her life, the late Vincent
Termini also of Lynn. Judy and Vincent were “joined at the hip” and could often be seen strolling around
Preston Beach Bluff in Swampscott.

Judy was beloved by many and was always remembered for her love of life and love of a good laugh.
She was a very caring and giving person who always put others before herself. She assisted her partner
Vincent as well as many of her family members through end-of-life care. In retirement her passion for
floral design was ever present. She was known for making the most amazing floral displays from just
about anything available to her. Judy loved to spend time on her balcony overlooking Lynn and Nahant
beaches and the Boston skyline. Never taking her view for granted, she would spend hours looking out
at the ocean watching ships and airplanes going in and out of Boston from her balcony “arboretum”.

Judy is survived by her son Bill Gillis and daughter in-law Marie Galvin of Boston, sister Carole Bannister
of Lynn, nephew Don Bannister and his wife Cherise of Largo, FL and great-nephew Frank Bannister of
Lynn.

A memorial service in her honor will be held Wednesday December 15 th , 3pm at First Church, 40
Monument Avenue Swampscott, MA 01907. Donations in her memory can also be made to Care
Dimensions 75 Sylvan Street, Suite B-102 Danvers, MA 01923; CareDimensions.org