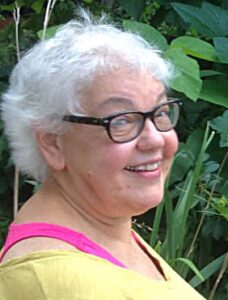 Judy Ziegler, dear sweet wife of Herbert Ziegler, passed away peacefully at home on the morning of July 8, 2017. Judy was a talented artist and graphic designer, with a studio in the Artist Building at 300 Summer Street in Boston. She resided with Herb at the same address in Cambridge, Massachusetts, since 1975. They were married in 1969 in Cincinnati, Judy’s hometown, after a romance of four years that began on a blind date at a Rolling Stones concert in Pittsburgh in 1965. They were married for forty-eight years.

Born May 24, 1946, Judy was the oldest of the three children of Ruth and Robert Frankenberger. She attended Walnut Hills High School, Cincinnati’s exam high school, and earned a bachelor of fine arts degree (BFA) from Carnegie Mellon University in 1969. Judy and Herb moved to Cambridge in 1971, where Judy pursued a career in graphic design and created fine art. She was a graphic designer for the Boston 200 Bicentennial celebration and worked at the Experimental Etching Studio in Boston in the seventies. She formed the Tudor Street Etching Studio in Cambridge with other artists, where she created many prints, some of which included collage elements that were woven, sewn or glued onto them. A portfolio of etchings from eight artists at the Tudor Street Studio, including Judy, is in the print collections of the Boston Public Library and the Harvard Art Museums.

From 1987 to 1995 she worked in a shared studio in Boston with Lisa Houck, where she experimented with papermaking, printmaking, and collage. During this period she designed two acclaimed posters for the Endangered Animal series published by the Graphic Workshop. In 1995 she bought a studio with Jen Mumford at the newly established Artist Building at 300 Summer Street in Boston. She expanded her creative work to include installation art, which gave her the opportunity to make larger, sculptural works. She also created book art using many materials and creative concepts; for the last few years she pursued letterpress art using handset type, which enabled her to combine her love of paper, typography, printmaking, and words.

Judy’s art was inspired by craftsmanship of all kinds. She loved process and execution as much as the end result. She studied bookbinding, Japanese woodblock printing, and letterpress printing. She attended classes at Haystack Mountain School of Crafts in Deer Isle, Maine, multiple times, taking classes in printmaking, artist books, and weaving. Her impeccable sense of design informed everything she made: she was confident about composition, color, and the power of shapes, lines, and letterforms.

Judy was a teacher in addition to being a lifelong learner. She was an adjunct professor at Massachusetts College of Art, for several years, where she taught a beginning graphic design class. She had students put their computers aside and taught them how to express ideas and concepts visually using paper and ink, requiring them to think deeply about their assignments and execute them with care and precision. And many of them loved her for it. Judy saw teaching as sharing her gifts, reflections of her kind, generous, and caring spirit.

Judy brought artfulness and exquisite design to her cooking, decorating, and entertaining; she set tables with crisply pressed napkins and colorful candles; she labored over complex sauces and spice mixtures. Judy arranged flowers beautifully and kept a lovely shade garden. She made hundreds of chocolate truffles each year for Christmas gifts. And she loved to sit and chat over dinner with close friends and family.

All her life Judy was a knitter. Knitting calmed her and kept her hands that always wanted to be making something busy. She made beautiful sweaters, usually with designs that she created, as well as “fruit” hats for infants, gloves, stockings, and scarves. Many family members and friends received these as gifts. She especially liked to knit sweaters for Herb. A few lucky people were able to buy little hats or gloves that she sold at Christmas sales. Judy worked at Woolcott & Co—a yarn store in Harvard Square—in the nineties. She loved beautiful yarn so much—wool, silk, cotton, all natural fibers—that she spent a chunk of her earnings buying end lots of the finest yarn when the store closed them out. She knitted constantly but, sadly, had vast quantities of yarn still waiting to be knitted when she died.

Judy was loved and respected by her friends and family for her unfailing and unconditional love, patient kindness, and caring for others. She had a sweet and gentle nature that everyone, even people she knew only briefly, noticed and responded to. Children she knew loved her, returning the gentle and intense love she showered on them. Judy’s smile was so big and so genuine that she glowed when she smiled; her eyes sparkled and her mouth opened wide in unselfconscious and unrestrained joy. Everyone who knew her remarked on her smile and loved to see it. She made so many friends throughout her life, from college and courses, in the art world, in her workplaces, among knitters, in her church, and among her neighbors. She has received an outpouring of loving remembrance from family, friends, and acquaintances.

Judy was devoted to her family. Her younger sister, Paula, with whom she was able to share her deepest self, died tragically in an automobile accident at the age of 26. Judy felt the pain of that loss throughout her life. Herb and Judy shared their home with Judy’s much younger brother, Doug when he needed their support and they helped him as he completed his high school education at Cambridge Rindge and Latin. Doug married Annika Nord, and they had two boys, Johan and Anders Frankenberger. Judy and Doug’s parents had passed away by then, so Judy and Herb became the boys’ surrogate grandparents. Doug and his family lived in California, but Judy and Herb managed to see them frequently, and Judy lavished love on them. For the boys, and for anyone she was close to, she spent thoughtful hours selecting and wrapping presents. The boys always eagerly anticipated “the box” from Aunt Judy in the days before Christmas. She loved all of her in-laws, and spent time with them when she could; She loved Herb’s brother Hap and his six children: Callie Burt, Gretchen Falter, Jeremy Ziegler, Benjamin Ziegler, Phoebe Kelly, and Polly Ziegler.

Judy followed the news, discussing current events and thinking long and hard about important issues. She subscribed to The New Yorker magazine, which she read faithfully every week, and then discussed the articles she read with Herb and friends. Judy was an artist and a visual thinker, but she was also a reader and intellectual thinker. She was a lifelong learner and, in her last fifteen years, she took courses at the Harvard University Extension College and Harvard Summer School to expand her knowledge of art, art history, art criticism, and art curating, as well as economic and political history and she took studio courses at the Carpenter Center. She was particularly interested in Japanese cultural history and took many courses in that field while expanding her skills to create artist books.

Judy was troubled deeply by discord, hatred, cruelty, self-aggrandizement, selfishness, racism, classism, sexism, and unkindness in any form. It pained her that she could not understand such behavior and that it is so prevalent in the world. She was very sensitive, and this behavior sometimes depressed and saddened her. Nevertheless, she went out into the world every day and engaged in it and tried to make it a better place. She felt a solemn obligation to be useful and contribute what she could to help others.

Judy was deeply spiritual. She was devoted to a daily practice of Bible study and religious readings. She felt the presence of God, and through God, a deep connection to all of humanity. At the end of her earthly journey, her faith helped her find peace.

Gifts in Judy’s memory can be given to Artists for Humanity, a Boston non-profit that teaches and employs teens in the arts (http://afhboston.org/donate.html). Be sure to indicate that your donation is in Memory of Judy Ziegler, Artist Building at 300 Summer Street, Boston.