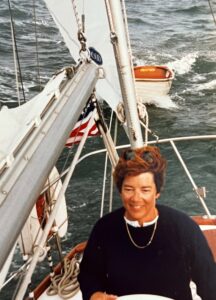 Kit was born in New York City October 5, 1941 to James Sinclair and Elisabeth Stillman Armstrong. As a child, Kit lived in Chicago until 1953 when her family moved to Washington, DC. She attended and graduated from the Sidwell Friends School in 1959. Kit attended Garland Junior College in Boston and then George Washington University in Washington, DC. Before graduating from college, Kit began her working career at the Securities and Exchange Commission for a few years; then moved to New York City to work in financial services. Kit’s employment interest was in human resources where she then worked for many years for various New York City financial firms.

Kit married Walter Lee Young, a New Yorker from Tulsa, Oklahoma in 1968 and they lived first in New York City and then in Bronxville, New York.  After their divorce, she moved to the Boston area, living first in Wellesley before settling in Needham.

Kit had a passion for needlepoint, and embroidered remarkable canvases that became pillows, belts, and ornaments enjoyed by all of her family members and many friends.  She loved cooking and having her family around the table for dinner.  Friends and family brought much joy to her life with trips to Chappaquiddick and Vermont to ski, which always included a lively card or board game. Kit loved living near her grandchildren and was often found at a sporting event, musical or concert.

A Celebration of Life will be held later this fall with details to follow.  In lieu of flowers, donations may be made to Trustees of the Reservations at https://thetrustees.org/ or Plugged In Band in Needham, Massachusetts at https://www.pluggedinband.org/donate.