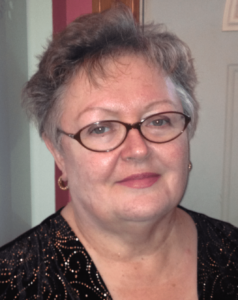 Kay Ann Hollender, of Revere, Massachusetts, passed away on May 15, 2018 after suffering a brain herniation caused by a third stroke in about an eight year period. She spent her last days surrounded by her family.

Kay (maiden name: Nelson) was born to Lenora and David Nelson on January 21, 1945. She grew up in Ogden, Utah, where she lived in a little pink house with her loving parents and siblings. She was very close to her older sister, Jean, who helped take care of her when she was little. She graduated from Ogden High School in 1963 and attended Weber State University. From Utah, she moved to California, Virginia, Kentucky, and finally Massachusetts.

She had many different jobs in her life: she was a security guard at the airport, a bookkeeper at a hardware store, did payroll for Boat U.S., and was an employee at the IRS (where she met her husband), to name a few. She also held voluntary positions at The Church of Jesus Christ of Latter-Day Saints, where she first served as Primary Secretary and later as a Relief Society teacher and Sunday school teacher, among other callings.

Kay was very creative. She liked to draw and do crafts. She loved music, going to the movies and watching sports, particularly football and baseball. She enjoyed reading biographies and history books. She liked to buy things from thrift stores and garage sales just as much, if not more, than buying things new. Kay was incredibly kind. She helped others whenever she could and was nice to everyone she met.

She loved her family very much and they loved her. Her husband, James (Jim) Hollender, and her children, Erik and Elizabeth (Liz), miss her dearly. To them, she was perfect.

A memorial service was held in her honor Saturday, May 19th at 11:00 am at the LDS Revere Chapel. The opening hymn, “Come, Ye Disconsolate” was chosen by Jim, because both Erik and Liz had been at times inconsolable and this hymn helps bring understanding and peace. Jim played “Elevazione” by Domenico Zipoli on the organ during the service. There was also a husband and wife team that played a piano and violin piece, “Nearer, My God, To Thee”. Liz had found in one of Kay’s scrapbooks a reference to the hymn “Abide With Me!”, so that was used as the closing hymn. The links to the organ recordings included in the song titles were all played by Jim subsequent to the service as an added memorial to Kay’s memory as a wonderful, loving and understanding wife.