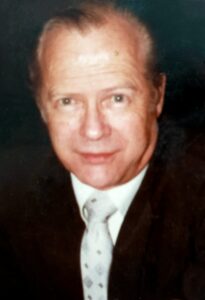 Kenneth (Ken) Jepson, of Peabody Ma, passed away at Salem Hospital, on February 23, 2021,
after a short illness.

Ken was the beloved husband of the late Lois (Deppe) Jepson, with whom he shared 61 years
of marriage. Ken was born in Melrose, MA, and was the son of the late Warren & Louise
Jepson and the brother of Elinor Leffingwell, Robert Jepson, Marilyn Lewis and the late Shirley
Bonnell. He left high school to serve in the Army during WWII and was stationed in China as a
radio technician. Ken was honorably discharged with the rank of Sergeant in 1947. After the
service, he worked as a picture framer for Malcolm G Stevens & Son until he retired at the age
of 62.

Ken is survived by his children, David Jepson and his wife Linda, Lori McHugh and her partner
Jim Hannon, Sandy Mullen, Scott Jepson and his partner Yen Nguyen, his grandchildren,
Mathew Jepson, Kerri Jepson, Ken McHugh and his wife Kammie, Stephen McHugh and his
wife Samantha, Joanna Roberts and her husband Bryan, Rebecca McHugh and her fiance
Evan Connerty, Joshua Mullen, Jared Mullen and his partner Tracy Campbell, Samantha
Jepson and her partner Justin Davis, Daniel Jepson and his partner Eliza Smith, and great
grandchildren Bastian McHugh, Charlie Roberts, and Julian Davis.
He loved his family and enjoyed the many visits and gatherings at his home. His family and
friends will miss Ken’s wry wit and sense of humor. They are sure he is in heaven now enjoying
eating his favorite Kentucky Fried Chicken, drinking his Coors Banquet and kicking the Angels’ butts in Trivial Pursuit! Ken was greatly loved by his family, friends, and caretakers. He brought
a smile to all who knew him. He will be missed terribly.

The family would like to thank Luz Biaz, Erin Barker and the team at Care Dimensions, Jessica
Pessimato of North Shore Elder Services, the caretakers from Bayada Home Health Care, and
the staff on Pingree 4 at Salem Hospital who took such wonderful care of Ken.

There will be no service per Ken’s wishes, however, a private celebration of Ken’s life will be
held at a later date.