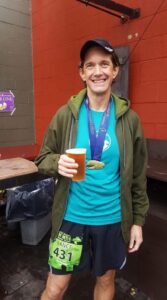 Lance (Drew) Andrew Kuehne (45) of Mount Desert Island, Maine; passed away November 28, 2019 with his usual grace and dignity. He was born during May 1974, in Smithtown, New York. Most of his childhood and young adult years were spent in the Sherburne/Earlville area of upstate New York. He graduated in 2000 with his BSN from Binghamton University. He worked on several units at Binghamton General Hospital until moving to Maine in 2014. Again he worked in several departments of Mount Desert Island Hospital, most recently in the operating room.

Lance has always had an adventurous soul. From teenage escapades in New York City with his best buds, to a year spent in South Africa following high school. During college years he spent a year in England with forays into Continental Europe. One of his two great passions was hiking. He considered completing a thru-hike of the Appalachian Trail in 2008 to be a major achievement. He was also able to explore a large portion of the United States by auto, stopping to enjoy many of the great western national parks. His favorite was Arches in Utah. He has repeatedly summitted all the mountains on Mount Desert Island. His other passion was running. For the past three-four years Lance participated in full and half marathons in addition to five and ten K runs. He was proud of his ability to finish first or second for his age group for every one. He has inspired several others to take up the sport. For the past two years he has been honored to share his nursing gifts on short term medical mission trips to the Dominican Republic. He felt that was a way to start giving back.

Lance/Drew was preceded in death by all his grandparents, his father, Lance; an infant sister, Meredith Claire; a brother-in-law, Mark Meister; and a step-brother Arthur Grimes. He is survived by his mother, Gail (Hildenbrand) Shiminski of Tennessee; his special partner, Kristin McKee and her son, Connor, of Maine. Also, surviving are his sisters, Wendy Kuehne, Florida; Becky(Brian)Hillis, Tennessee; and Angela(Justin)Meyer, New York. Mourners also include his step-family: mother, Kathleen Kuehne, sister, Sharon Grimes; and brother, Edward Grimes. Numerous aunts, uncles, cousins, nieces, and nephews survive. Additionally, grieving his passing are many, many friends, all over this country and the world. Especially his former wife and continually treasured friend, Jennifer Leonard.

In accordance with Drew/Lance’s wishes there will be a memorial celebration of his life during warmer weather on Mount Desert Island. Meanwhile, in acknowledgment and celebration of too short a life, well-lived; raise a cold, frothy stout!