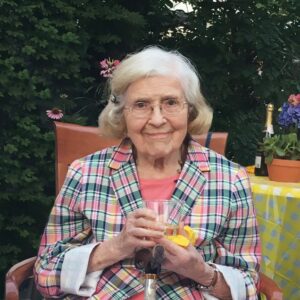 Laura Mae Cramer Miller of Belmont, MA was born in Linn, MO on July 30, 1922 to Lola Zewicki
Cramer and Buell B Cramer. Her father was an educator and her mother was a homemaker.
During her school years her family lived in Smithville, MO where she attended elementary,
junior high and high school. She started college at age 16, majoring in social studies, and
graduated from the University of Missouri (MU) in 1943. From early childhood she always
wanted to be a teacher. She taught history, social studies and English for nine years in
Montgomery City, Marshall and Webster Groves, all in Missouri, and at the Baker School in
Brookline, MA.

In 1948 Laura married John Preston Miller, whom she had known since childhood from
Smithville, and a University of Missouri graduate. As a 20-year old student studying chemistry,
John had been recruited by the US Army to work in Los Alamos, NM on the Manhattan Project
helping to develop the atom bomb. His exposure to the mountains of New Mexico drove him
to change his major to geology when he returned to MU after the war. The newly-weds moved
to Cambridge, MA for John to earn his PhD in geology at Harvard University. During his first
faculty position at Pennsylvania State University, Laura gave birth to the first three of their four
children. In 1954 John was offered a faculty position in Harvard’s geology department. The
family lived first in Arlington and then settled in Belmont where their fourth child was born.
John was a popular professor and Laura was busy raising children and being involved in their
schools. Many summers involved driving across the US — stopping to visit family in Missouri
and to see friends and colleagues in other locations – to Santa Fe, NM where for John did
fieldwork for the United States Geological Survey in the Sangre de Cristo Mountains.
In 1961, after working in New Mexico, John became ill and died from complications from
bubonic plague, a disease not uncommon in the desert areas of the Southwest but unfamiliar to
East Coast doctors. Laura was left with four children, ages 10, 8, 7 and 7 months. Many families
in Belmont as well as members of the Harvard University geology community were helpful and
supportive over the next several years.

Tragedy struck again in 1973 when son, Kirk was taking a semester off from college, driving a
cab. During a period of deep tension in Boston, he was robbed and murdered. That death,
tragic by itself, was compounded by the death 12 years earlier of John.
Despite these terrible losses and dedicating much of her life to maintaining her husband’s
legacy, Laura had a rich and full life. She worked for Executours, Inc., founded by her friend
Ellen McKenny Fahey, giving historic tours of the greater Boston area, relocating people when
their companies moved to Boston, and planning conventions. She opened her home to
international students at Harvard and Boston University and traveled with Friendship Force to
Australia and New Zealand. Raised Methodist and Presbyterian she became a Unitarian
Universalist and was a longtime member of First Church in Belmont where she was involved in
the Sanctuary program for Central American refugees, co-sponsored the resettlement of a
family from Viet Nam to Belmont, and was active in the Transylvania Partner Church program,
including visiting the partner church in Romania. She was involved in METCO and raised money
and support for students from Boston to attend school in Belmont. An active member of
Belmont Against Racism (BAR) in the 1990s she helped organize meetings and events to
promote awareness of racism and activities to counter it. In 2008 she received the Martin
Luther King Jr. award from BAR.

Laura had friends of all ages in nearly every state and many countries. She traveled extensively
in the US including driving across the country in 1967 with her four children ages 16, 14, 13, and
6 where the teenagers played the radio very loudly. She visited Poland, France, England, South
Africa, Japan, Hungary, Romania, New Zealand, Australia and Spain, and on many of those trips
was hosted by people she knew.

Laura was an ardent Red Sox fan, a strong Democrat and a supporter of progressive causes.
She never missed an election. Every day she read The Boston Globe and watched the news and
she followed the 2020 presidential election closely, thrilled that Joe Biden and Kamala Harris
won. She loved presidents Abraham Lincoln, Franklin Roosevelt, John Kennedy and, especially,
Barack Obama. Although she considered herself a Bostonian, she never forgot her Missouri
roots and she returned to Linn and Smithville every year until recently. In 1986 she and her sister donated their grandparents’ house to the Osage County Historical Society. It is now the
Zewicki House Museum and was listed on the National Register of Historic Places in 2002.
She was a devoted mother and very proud of her children. She was involved in things they did,
such as serving on the board of Boston Children’s Theatre, an organization in which two of her
children were active. It was in her back yard where all the neighborhood children gathered to
play baseball and kick-the-can and hold fairs that raised money for the Jimmy Fund and the
Kennedy Library. She was helpful in her neighborhood and community, always demonstrating
that old fashioned term of “loving kindness”.

She loved many Boston institutions, particularly the Museum of Fine Arts, the Museum of
Science and of WGBH (Boston’s PBS TV station). For years she would let her children watch
anything on Channel 2 but only one show a week on commercial television. She adored
Masterpiece Theatre and would discuss episodes by phone with her daughter. She took her
children and their friends to see plays, musicals, historical sites and art exhibits. She was an avid
reader and in recent years enjoyed hearing people read to her.
Laura adored her grandchildren and had a special relationship with each one. Even though the
family was spread out across North America they were in regular contact by phone, Skype,
Facetime, Zoom, cards and visits. And she loved her great grandchildren very much.
Friends, including members of First Church, and family kept her going. She lived in the same
house for 61 years where old and new friends were always welcome. All her birthdays were
celebrated including a big one in her back yard when she turned 95. In grade school she had
been told to not sing and to pass out the music instead, but she loved to hear singing and to
sing herself. Singing every night with her son, Roger and her home health aide,
HasifahNamugenyi became an important part of Laura’s routine.

Arrangements have been handled by Boston Cremation. A virtual memorial service will be held
in the near future and an in-person outdoor celebration will be held in the summer or when it is
safe to gather again. For questions about these events, please contact one of the family.
Donations in Laura’s memory can be made to METCO, the Metropolitan Council for Educational
Opportunity, https://metcoinc.org/, the United Negro College Fund, https://uncf.org/ or the
Osage Country Historical Society, P.O. Box 402, Linn, MO 65051.