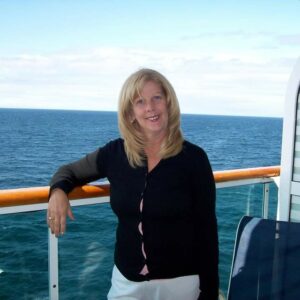 Laurie Ann Scafati, age 58, of Norton, formerly of Dedham, passed away peacefully with her loving family by her side on Friday, July 10th following a brief battle with cancer.

Born in Boston on February 9th, 1962 to the late Victor and Lauretta (Hanlon) Scafati. She was the youngest of seven children.

Laurie’s greatest joy in life was her family with her most treasured memories in life being summers on Nantasket Beach as a child, boating on the ocean as teenager, and vacationing with her daughter on the beach. Above all she cherished being a mother, considering her daughter her greatest accomplishment in life.

Blessed with the gift of gab, Laurie will always be remembered for her ability to strike up a conversation with just about anyone and make you laugh when you needed it most.

A passionate animal lover, she adored her dog, Bella and missed her late dog, Jordan.

Laurie is survived by her loving daughter, Kristen M Shamon of Mansfield. She was the dear sister of Judith MacDonald of Vermont, Stephen Scafati of Needham, JoAnne Voltaire of Maine, Janet Morin of South Carolina, Mary Conroy and her husband, Ted of Seekonk, and David Scafati and his wife, Sherry of South Carolina. She was the treasured aunt of LeeAnn and Lisa Gibney of Vermont as well as several other nieces and nephews. Laurie was predeceased by her brother-in-laws, Terry Gibney and Will Morin. She will be missed by many more family and friends.

Expressions of sympathy in memory of Laurie may be made to the MSPCA.