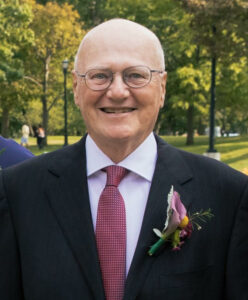 Leo Mark Renaghan, 75, died on December 31, 2018, after living 20 months with brain cancer. He is survived by his
beloved wife, Laurette Dubé, son Leo Aidan Renaghan and wife Allison Springer, stepson Olivier Rioux and wife Pei-Hsiu
Chen, and grandchildren Maia and Eloise Rioux. Mark was the son of the late Leo Joseph Renaghan and Dorothy Frances
(née Hughes) Renaghan, and is survived by his siblings and their families, Joseph Renaghan, Mary Renaghan, Philip
Renaghan, and Dorothy Renaghan, as well as his lifelong best friend Jack Ryan. He was predeceased by his siblings: Denis
Renaghan, Kevin Renaghan, Martha Renaghan, and sister-in-law Claire Renaghan.

Mark was born in Somerville, Massachusetts and graduated from Hingham High School. He spent his childhood summers
in the restaurant industry, washing dishes and cooking in Boston and Cape Cod. He earned a Bachelor of Science in Hotel
Management from the University of Massachusetts Amherst. After graduation, he served his country as a U.S. Army
Area Studies Intelligence Specialist in the 66 th Military Intelligence Group in Germany. Upon his return, he completed a
Master of Business Administration from Michigan State University and a Ph.D. in Marketing from Pennsylvania State
University. Among the most influential academic leaders in the hospitality industry, Mark (or Leo, as he was known in his
professional life), was on the faculty at Cornell University’s School of Hotel Administration for over 35 years, and served
as Associate Dean for Academic Affairs. He pioneered the introduction of modern marketing methods in the hospitality
industry around the world as an international hotel consultant and he served on the Board of Directors of Rezidor
Hospitality Inc (formerly SAS International Hotels).

Mark spent his life traveling the world for work and pleasure, spending extensive time in Europe, Asia, and Australia. A
lifelong learner, Mark continually pursued his passions for Shakespeare and Wagner. He was a voracious reader and
never passed an opportunity to relax with a good book, whether it was a paperback mystery or a historical biography. A
football player in his youth, Mark took up hockey as an adult and developed a passion for skiing and tennis during his
later years in Quebec and Florida. His life was filled with an array of loving family and friends from around the world, and
Mark took great joy in making new friends, sharing stories, and providing advice to all on how to lead a life well lived.
Mark’s life had to end but his love does not. Per Mark’s request, a celebration of his rich and multidimensional life will
be held for friends and family in Montreal later this year.

In lieu of flowers, Mark and his family have designated three organizations that were important to Mark and his family.
Mark donated his brain to Massachusetts General Hospital for research into his disease, Glioblastoma Multiforme, and
loved ones may make a gift in Mark’s memory to support the research of his medical oncologist, Dr. Isabel Arrillaga, at
Mass General (https://giving.massgeneral.org/donate/ or by mail to Heidi Bergmeyer, MGH Development, 125 Nashua
St., Suite 540, Boston, MA 02114). Mark spent the last three peaceful months at the Miriam Boyd Parlin Hospice
Residence in Wayland, MA , and you may make a gift to support their work in Mark’s honor
(https://www.mountauburnhospital.org/locations/caregroup-parmenter-home-care-hospice/). Lastly, Mark was a
passionate about Shakespeare and attended the Stratford Shakespeare Festival every year for decades. Friends and
family can continue Mark’s legacy with a gift of support in his honor
(https://www.stratfordfestival.ca/SupportUs/CommemorativeGifts or by mail to: Stratford Theatre Festival, c/o Cathy
Kemp, 55 Queen St., P.O. Box 520, Stratford, Ontario, Canada N5A 6V2). All gifts should be designated in memory to Leo
Mark Renaghan.