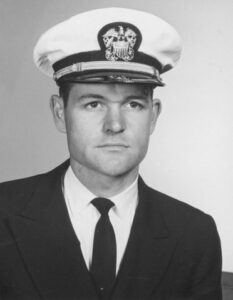 Leslie Moore “Les” of Essex, MA, died September 30, 2013, at the age of 78 at the Kaplan Family Hospice House in Danvers, MA. Les graduated from North Quincy High School (1953) and Rhode Island School of Design (1959). Upon graduation, Les was commissioned as an Ensign with the US Naval Reserve. He served his active duty in the Mediterranean and in Bermuda, where he met and married, Charlotte Maxton, of Phoenixville, PA. The couple raised a family in Nahant, MA, before retiring to Essex. Les enjoyed a long and successful career as an architect, establishing several partnerships in Cambridge and Boston specializing in institutional and public buildings with clients such as Harvard, MIT, MBTA and government agencies. His firm received the Massachusetts Governor’s Design Award for Alewife Station. In retirement, he worked on personal residence projects for himself and friends. An avid sailor, Les was a member of New England Multihull Association and the Essex Historical Society and Shipbuilding Museum. His pride and joy was Quicksilver, a Dick Newick designed 40-foot trimamaran that Les built with his sailing partner Mike Conley. The Nahant partners owned and raced the boat for 20 years, competing in the Newport to Bermuda Multihull Race in 1976, 1981 and 1983—winning in ’83 on corrected time. His most recent boat, Pocket Rocket, a 32-foot Gougeon catamaran, provided many years of enjoyment in Essex Bay and around the north shore. He is survived by his daughter Alison (Moore) Cotter and son Justin Moore, their spouses Sean Cotter and Lisa (Carey) Moore, and his four grandchildren Emma and Patrick Cotter and Mackenzie and Quincy Moore. He will be remembered by many for his sense of humor and generous spirit. Always the giver, Les chose to donate his remains to Harvard Medical School. Plans for a memorial service will be announced at a future date. If desired, Memorial Contributions can be made to Essex Shipbuilding Museum, PO Box 277, Essex, MA 01929.