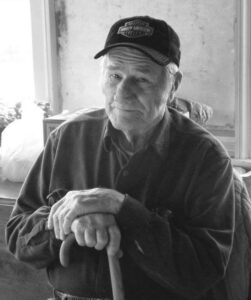 Westminster – Lewis N. Hayward, 94, passed away peacefully at home on Sunday, April 15, 2018 after a long illness. He was born in Randolph, Ma on January 3, 1924 to the late Norman and Ella Marie (White) Hayward.

Lewis grew up in Gardner, Ma and attended Gardner High School. He joined the Merchant Marines with his cousin, Roger Hayward, and the two proudly served during World War II. They sailed all over the world and had many adventures.

After four years in the service, Lewis met Frances Page on a blind date and they fell in love. The two recently celebrated their 70th wedding anniversary on April 3, 2018.

After marriage, Lewis and Frances settled on the family farm in Westminster, where they greatly enjoyed taking care of the animals and the land. He also loved riding motorcycles with his brother-in-law Neal and son Michael. He was a sports enthusiast and played semi-pro football for the Gardner Merchants team. He was a champion arm wrestler who was undefeated while in the service and for many years later.

Over the years, Lewis worked as a truck driver for Shepard’s Trucking and Gerard’s Transportation, both located in Leominster, Ma and Hulett’s Trucking in Gardner, Ma. He also worked as a security guard at Digital Equipment Corp. in Westminster for eight years, retiring in 1986.

Lewis was a wonderful man with a huge personality, a true comedian who enjoyed making people laugh. He will be greatly missed by all who knew and loved him.

The family would like to thank the Gardner Visiting Nurses hospice team for their excellent care and support. There are no calling hours and a private service will be held at the convenience of the family. Memorial donations in his name may be made to a veterans charity of choice or GVNA HealthCare, c/o Office of Development & Community Relations,