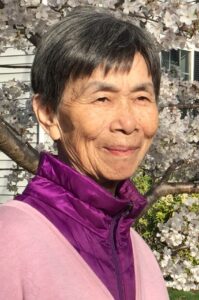 Lihua Chen of Milton, Massachusetts, passed away on June 17, 2018 after a valiant battle with lung cancer. Her devotion to her family and her belief in God supported her in her struggle and ultimately gave her peace. She spent her last days in her Milton home surrounded by her family.

Lihua was born to her late parents Xizhen Chen and Jinlian Zhang, a business manager and a homemaker respectively, in Nanchang, Jiangxi, China on July 16, 1935. She was the youngest child of the family. Her three elder brothers passed away before their adulthood, so she was the only child of her parents who grew up to adulthood. She had graduated from Nanchang Yi Zhong Middle School in Nanchang before she obtained her high school and college diplomas via spare-time studies. She had several administration jobs in her lifetime and was running a municipal street light company in Nanchang before she retired at age of 55.

Lihua was blessed with a large and loving family. She married her best friend and coworker Changchun Hu in 1957, who preceded her in death. They together raised four children: Qiyue, Qingyi, Qinghong and Qimin. She is survived by her four children, three grandsons: Difan, Yingjie and Jiayi and one grand-granddaughter: duoduo. She raised one of her grandsons, Yingjie from his first year to almost ninth year. She loved her family as much as her family loved her. She was the backbone of the family.

She was very kind, caring, giving and considerate. She always gave hands to those who needed. She helped people to obtain better jobs. She helped people financially. She treated her coworkers so nicely that they often asked her for advice even many years after she retired.

She was influenced and touched by Christian community during her stay in Boston in 2006 and 2007. She studied the Bible at the same time. She praised the Lord. She was baptized on June 1, 2018.

A viewing of the body will be available to the family at Boston Cremation (June 21, 2018 between the hours of 9 and 10 a.m.) followed by a memorial ceremony. The cremation will take place after the ceremony and the cremains will be taken to China and buried in her home town of Nanchang, China.