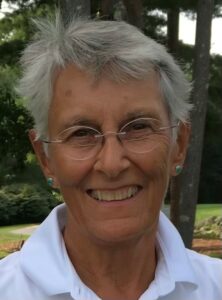 Linda Marilyn Goulet, of Somerville, passed away on August 2nd in her home after a valiant eight-year battle with cancer. Linda leaves behind her beloved wife, Debra Olin, her three sisters and their families- Marcia Sharkey, her husband Roy and their son Justin and wife Alyssa; Suzanne French, her daughter Nicole and wife Mary, Brianna and husband Shayne and their daughter Maeve; and Jennifer Madigan, her husband Kevin and Jennifer’s daughter Axis. She also leaves behind the son of her sister Christine Goulet (1949-2020) Ali Goulet and his wife Joanna and their sons Ethan and Max. In addition, Linda is survived by her great-godson Jack Spencer LaRoche, son of her godson Christopher Spencer (1978-2020). Linda also leaves behind many cherished friends, colleagues, and her treasured cat, Ziggy.

Linda came from a military background where her family spent time in Vienna during her elementary school years.  The family moved to Rhode Island where she graduated from Coventry High School.  After graduating from Rhode Island College in Education, she started her career at the adolescent unit of Boston State Hospital. She later worked in the Boston City Roots program. In 1982, Linda began teaching as a Special Needs teacher at Dedham High School where she retired after thirty years.  Linda loved working with teenagers and had a generous, patient, and non-judgmental spirit that made her career choice a perfect fit. Linda also ran the Peer Leadership program, Words not Weapons project, and the Gay/Straight Alliance. In the early 1990’s, Linda received a master’s degree from the University of Massachusetts in Conflict Resolution.

Linda was an accomplished athlete in many sports, but her passion was golf.  As an avid golfer, she truly loved the game playing nearly 300 rounds a year once she was retired.  She played in several Women’s Golf Association of Massachusetts, Mass Golf, and USGA tournaments as well as other prestigious golf competitions.  She was a long-time member of President’s Golf Course in Quincy where she won the Club Championship seven times which was among many of her major wins.  In 2018, at 71, she posted a score of 7-over par 79 to capture the Massachusetts Women’s Senior Amateur Championship Legends Gross Division title for Classes A&B, which is a division reserved for those competitors 70 years or older. She enjoyed the camaraderie of the game while being a tenacious competitor and was always ready for “side action” often taking her competitors’ money!  She coached girls’ volleyball at Dedham High School and taught golf at Curry College. In addition, she taught tennis and coached a women’s softball team.

Linda loved music, dancing, sports, food, and travel. She had a great sense of humor, the ability to forgive and a love of life. Linda had a vast network of friends, including her golfing pals and her neighbors at the Brickbottom Artist Building in Somerville where she lived with her spouse for 34 years.  Everyone lucky enough to have known Linda was touched by her kindness, generous spirit, and compassion.  She will be greatly missed by her friends and family.

Donations can be made in Linda’s memory to the Lymphatic Education and Research Network. www.lymphaticnetwork.org