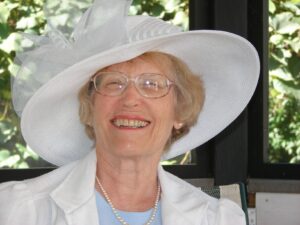 Linda Ruth Andresen Harding passed away on May 4th, 2020. She was born with joy and music in her soul, and both have been threads in the fabric of her entire life. The middle child of Muriel (Curtis) and Thomas Edward Andresen Sr. in a devoted, tight-knit family in Swampscott, Massachusetts; Linda grew up to have memories of what she often called an ideal childhood. Her father served in both the Army and Navy. Her mother kept an ordered household, and Linda, with her brother and sister, enjoyed making fudge, playing “dress up”, and especially, the times they shared on the riverfront at the summer home in Gloucester.

Music was part of Linda’s education at every level. At first it was the piano, and practicing with her sister after supper excused them both from washing the dinner dishes. Later it was the clarinet, the instrument that brought her into the high school band when she was still in junior high. Ultimately it was her soprano voice, at the center of her college years and the expressed gift as a professional music educator in Connecticut, and several towns in metro west. She treasured her times with young children and she felt gratified with establishing the Cherub Choir in her church in October 1995. Meeting members in recent years, now as grown adults and some with children of their own, has always been a happy moment.

Linda laughed readily and heartily at truly funny things, but not when anyone got hurt, or when the humor involved derision or disrespect. She disliked cynicism. She could come up with a song for nearly any moment or feeling, and her teaching it was always a joy-filled experience for everyone. Her own two children were among her best students.

As a mother, Linda devoted her time for fun with games and puzzles, and untiring support for after-school activities. Waterpark visits were a priority. She loved competition. In Scrabble, she could turn to invented spelling, and being with her while watching the Red Sox or the Patriots was an experience to behold – she was so enthusiastic. Linda did not have to talk much about family values, or what was right and fair and just. She simply made them the focus of all she did each day.

Linda was a sister of Chapter K, PEO. Having been inducted in 2006, she delighted in its mission and supported it completely. It was, she said, her chance to help with issues “beyond her own.” She also spoke of finding so many precious friends, and at the end of phone conversations, Linda was always last to say, “Bye”.

Her longest personal involvement was as a member of the Village Church Choir. She claimed that her singing was her way of praying and she told others that when she didn’t feel well, it was her best therapy and she felt as though “nothing was wrong.”

Linda’s remaining family is large and widespread. She leaves Bradford Harding, of Natick, her adoring husband of 56 years; Thelma Tisdale of Peabody, her sister and special family music partner; her devoted brother, Thomas Andresen Jr, and his wife, Susan of Gloucester. Linda’s children are Peter Thomas Harding and his partner Karen Heavey, of Wayland; and Sarah Elizabeth Harding and her wife, Jennifer Sulin-Stair, of Catonsville, MD. Missing Linda also are her granddaughters, Charlize and Ryenne.

Close to Linda were her nephews; Thomas Andresen III, and his wife Ashley, of Fanning Springs, FL; Curtis Andresen, his wife Tania and their son, Michael, of Georgetown; and Anton James Andresen, of Peabody. Linda was also close to her cousins, Clayton Curtis, his wife Pat, and their daughter Julie, of Swampscott.

Many additional cousins, nieces and nephews live in several states and in Norway.

In recent years, Linda lived with two episodes of cancer. She called both of them her “adventure.” She did not want them, she did not like them, but she never saw herself as a victim. She accepted her cancer with determination and faithful attention to the care and guidance of her medical team. At home with hospice care and that of her family, she died peacefully at age 79.

A service to celebrate Linda’s life is planned for the near future, and her cremated remains will be interred in the cemetery at her church.

Linda and her family request that gifts in her memory can be made to:

designating either the ‘Choral Music Library’, or ‘Memorial Path’.