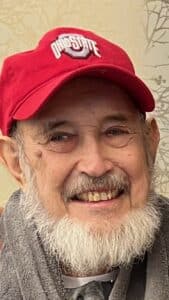 Louis “Lou” Enrique Lopez, 91, passed away Saturday August 20, 2022 after a long illness, cared for at home for all but the last three weeks, by his wife of almost 69 years, Mona (Finnan) Lopez.  Lou was born in NYC during the depth of the depression in 1931.  As a young man his father, Enrique Lopez, had fled Pancho Villa’s marauding revolutionaries in Mexico, leaving behind the affluent  family ranch and 14 siblings, eventually finding administrative work at the Mexican Embassy.  Lou’s mother, Alicia Chinchilla Rodriguez, took the equally courageous step of leaving her family and Puerto Rican homeland as a young, single, but college- educated woman.   Enrique and Alicia married and together they raised Lou as part of New York’s growing Hispanic community.

While attending Xavier Military Academy as a high school student, he was particularly proud of his ROTC membership and lifelong friendships with classmates and the Jesuit priests who helped shape his strong Catholic faith.  He began college life at Fordham University but completed his studies at The Ohio State University, made possible by a track scholarship.  Though his outstanding relay team was nationally competitive, he fell short of an Olympic Dream. This would fuel a fulfilled desire years later to bring his entire family of 7  to Mexico City in 1968 to view the Olympic Games, including many track events.

During college summers Lou escaped the NYC heat by caddying with his Sigma Nu fraternity brothers at the Lake Placid Club in Lake Placid, New York. It was there that he met and married a Lake Placid native coed waitressing at the club. Upon graduation, Lou served as First Lieutenant in the US Army for two years in New Orleans and  Thule, Greenland, followed by service in the Reserves. Upon his return to civilian life, a business card from a former grateful Lake Placid Club golfer led to an entry level position at the Spencer Trask brokerage firm on Wall Street (where it’s believed Lou was the first Hispanic hired to a white collar job on Wall Street).  He  was eventually promoted to Head Cashier, the youngest ever, at the age of 28. As a result, Lou and Mona were able to purchase a brand new single family home in Piscataway, NJ where they raised five children and resided for 60 years.

During those years, Lou and Mona were among the movers and shakers of their Mitchell Avenue neighborhood and greater community, organizing annual neighborhood events, softball leagues, political campaigns and always, always boisterous parties for their beloved family of friends.  Throughout, Lou was intensely present, as a fierce competitor, loyal friend, supportive father and patriotic American.  He loved traveling the world, movies (especially any film featuring Spencer Tracy), Dewers scotch (some ice, a little water, always stirred), dancing with Mona, his life-long dance partner extraordinaire, The Ohio State University (he wore his college ring and OSU cap every day of his life) and arguing politics.  In that arena, he was never wrong.  Or so he said. He served on the Piscataway Board of Education, and was a twenty year member and president of Community Access for the Handicapped.

Though Lou will regretfully not be physically present, he will be sending his love and best wishes to new granddaughters in-law Regina, Alexandra and Nicole who will be marrying grandsons Sal, Nick and Vinnie this upcoming September, October and November.

A funeral Mass  will be held at St. Mary’s Catholic Church at  330 Pratt St., Mansfield MA,  at 10:00 AM on Wednesday, August 31st, followed immediately thereafter by a Celebration of Life and reception for family and friends at Red Mill Village Meeting House, 1 Codding Rd., Norton, MA. No flowers please. Donations may be made in Lou’s memory to St. Jude Children’s Hospital, or Tunnel to Towers Foundation.