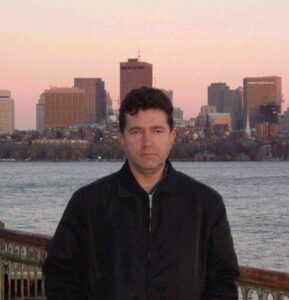 Luiz was born in Alto Rio Novo, ES, Brazil on August 13, 1958. First male born in a family with 3 girls: Ilda, Teresa and Zeli. He was named after his father Luiz who was very proud of him.

Luiz was raised in a small town and with his sisters and brothers, Roberto and Mario grew up in an evangelical family and he used to roleplay as a preacher influencing his brother who became to be a pastor.

Luiz was charming.  He was kind, nice and fun. He was also a very handsome man but at a young age he got to meet the one who would be his wife for 35 years, Leila whom  he had 3 daughters with and established his family in Mantena, MG, Brazil.Luiz was a hard worker. As a child he used to plant, collect and sell fruits and vegetables to help his family out. As a young man he worked as a salesman and traveled with his father.

Luiz was a dreamer. In 2002  Luiz left Brazil to pursue his “American Dream” coming to the USA where he worked to help his family to achieve a better future. He worked in many places and different areas but it was in Plymouth (Main St Sports Bar and Grill) where he made his closest friends and wanted to stay. To name a few Brianna, Paulina, Erica, Chrissy, Ashley, Meesh, Seth, Alex, Craig, Sean and many more. He built a bridge with his kindness and even though language was a barrier, that wouldn’t stop him from trying to make everyone smile.

Luiz was a great father and grandpa. His legacy will pass to his daughters as someone who went through everything for his kids. In 2015 he brought Monique to visit him and in  2016 he finally met his granddaughters and daughter Zayra, which he brought to live in Boston. His greatest pride was watching his grandchildren learn and live the American Culture which he embraced as his own.

Luiz had a big heart. He adopted his nephew Luiz and his family and friends as his own. He had a special care for Nayara, Victoria, Luan, Manny and Lili. Social media kept him in contact with his fellow brazilian friends and he used it to find much more.

Luiz was numismatic. He loved collecting coins and other objects, and he was very passionate about it. He made sure to pass it to his granddaughters. Luiz was a warrior. In 2018 he was diagnosed with a rare and aggressive cancer but he survived. He became a volunteer in a study in MGH Boston led by Dr Isabel Arrillaga who with an amazing staff (we could never forget to mention George Lilli) helped him to live a life with hope and quality. He was one of the last to survive. Care Dimensions made his last moments as peaceful as possible bringing love and care.

Luiz Lima do Prado, age 63, brazilian, resident in Boston for 22 years peacefully passed away on January, 21th with his daughter by his side, after 4 years battling Glioblastoma, a brain cancer. He’s survived by his daughters Zayra and Monique, son-in-law Joarley and Fabio, granddaughters Sarah, Thalita and Aline Luiza, brothers, sisters, numerous nieces and nephews and true friends, including his pet Gandalf.  He was predeceased by his parents Luiz and Edith, Ezequias and Eliezer and his daughter Aline (1982 – 2011).

Luiz accomplished his mission and now he’s free from pain and sadness. He went to Heaven and he rests in the arms of his Father.Love is like Spring. Just wait for the time to come. Luiz will forever be in our hearts.
With love, Zayra and Sarah