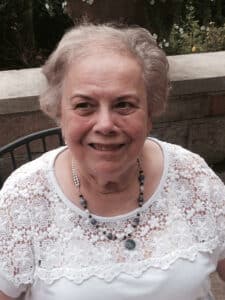 Manuela (Nelly) Rivera Ruiz was born on November 7, 1933 in Fajardo, Puerto Rico to Manuel Rivera and Celia Ruiz. Tragically, her mother died when she was very young, leaving Nelly and her older sister Josefina in the care of close family friends, the Lightbourns. Mr. and Mrs. Lightbourn and their adult children raised Nelly and her sister. After graduating from high school in Puerto Rico, she completed training in a San Juan secretarial school and held positions with the Chamber of Commerce and at the U.S Navy base school.

In the late 1950’s, she met Allen Perry, who had been working in Puerto Rico. After Allen completed service in the U.S. Army, they were married in September of 1959. They returned to Bloomington, Indiana where Allen completed his bachelor’s degree and Nell worked in the I.U. Purchasing Department.

They returned to Puerto Rico after Allen earned his degree. John and Carl were born there in 1963 and in 1965. They moved for Allen’s career back to Indiana, to the Chicago area and eventually to the DC area. Nell was a devoted mother, wife and friend. She stayed home with John and Carl and later worked at the local kindergarten and volunteered in her church, for migrant ministries in the Chicago area and in support of a community mental health organization in Indiana. She worked for several years in the membership department of the National Association of Secondary School Principals in Virginia until her retirement. Allen and Nell moved back to Indiana in 2001and in 2015 moved to Massachusetts to be close to their sons.

She was preceded in death by her mother, Celia; father, Manuel; husband of 60 years, Allen and sister Josefina Thornton, as well as her beloved Labrador Retriever, Barry. She is survived by sons Carl of Boston, MA and John (Julie) of Lexington, KY; grandson Charles (Ashley) of Cincinnati and great granddaughter Kendra. The family would like to give special thanks to Sharon Garland and Kelly Gordon whose service to Nell was invaluable in the last few years.

There will be a memorial service for Nell at Bertucci’s in Mansfield, MA on Friday, August 5 from 11:00am – 12 noon eastern, that will be accessible by Zoom video or phone conference for family and friends around the country. To rsvp, please email japerry85@gmail.com. In lieu of flowers, please send memorial donations to St. Thomas Episcopal Church, Taunton, MA. https://stthomastaunton.com/