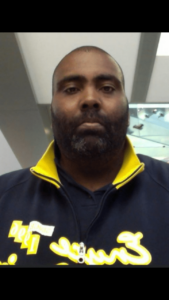 Marc Aaron Ross was born on February 20, 1974 in Boston, MA. Marc was the fourth child of seven children. Marc was educated in the Boston public school system, where he earned his middle school diploma from William McKinley. Also, Marc graduated from Jeremiah E. Burke where he earned his high school diploma. Marc was a very happy child and he loved to joke around with everyone. We used to call him Mr. Silly as a kid, and he even had a shirt that read Mr. Silly. Marc loved to listen to music he enjoyed buying all the latest cassettes and cds while growing up. Marc grew up in the era of rap, and he was an avid fan of rap music. Marc was known for having his boom box radio playing his favorite rap songs very loud. Some of Marc’s hobbies growing up were riding his bike, attending wrestling matches. Marc would spend family time with his younger twin brothers taking them to the original Boston Garden to attend the wrestling matches. Marc was a great brother, mentor, and friend.
Later in his life, Marc had a passion for cooking; always aspiring to be a chef. Marc was employed in several Boston hotels in the Back Bay area as a cook. He enjoyed working in the hospitality industry. Marc was a kind and loving person, Marc was extremely outgoing and he loved helping people that were in need. He would perform odd jobs for people in the neighborhood, or just lending a hand to a friend.

Marc was very close with his mother and loved his family, calling them on the phone several times a day. He would simply say “Hey, what are you doing”? We would answer, and he would say “nothing much, alright then I love you, talk to you later”. He just wanted to reach out and hear his family’s voice just to keep in touch and let us know he loved us.

Marc was a very independent person even as a child, he was loving and caring. Marc loved kids always doing little things for his nieces and nephew. Marc had a strong affection for dogs and all animals. At one point, Marc worked on a farm and truly enjoyed it.
Marc was always happy and greeted everybody he saw with his charming personality. He was simply known as “Ross” around the city of Boston. Marc will be missed dearly by family and friends.

Marc is preceded in death by his brother Germaine W. Ross, and his brother Wayne F. Ross. Marc is survived by his beloved mother Rose R. Ross of Chelsea, MA, his sister Tiffany R. Ross of Winthrop, MA, his sister Kimberly B. McKinney (Anthony) of Lynn, Ma, his sister Nikesha L. Ross-Armstrong (Andre) of Boston, MA, and his brother Jason Ross (Katherine) of Everett, MA. He leaves behind a host of nieces, and a nephew as well as aunts, uncles, cousins, friends, and family.
The Ross, McKinney, Armstrong, and Lee family would like to extend our sincere thanks to everyone who supported us in our time of bereavement. May God bless you all.

Psalms 23:
The Lord is my shepherd; I shall not want. He maketh me to lie down in green pastures: he leadeth me beside the still waters. He restoreth my soul: he leadeth me in the paths of righteousness for his name’s sake. Yea, though I walk through the valley of the shadow of death, I will fear no evil: for thou art with me; thy rod and thy staff they comfort me. Thou preparest a table before me in the presence of mine enemies: thou anointest my head with oil; my cup runneth over. Surely goodness and mercy shall follow me all the days of my life: and I will dwell in the house of the Lord forever.