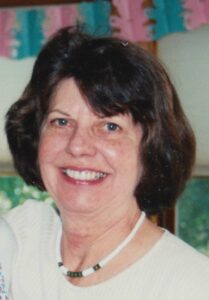 Marcia Gwen Whittington, 83, of Waban, MA died on September 26, 2017 peacefully in her home. She was born on April 23, 1934 in Lawrenceville, IL to the late Marshall Glenn and Wanda (Bouchie) Whittington.

Marcia was proud to be the first in her family to graduate from high school. She went on to earn her B.A. in English Literature from DePauw University in 1956. Upon graduating, she spent a memorable summer touring Europe with her college dance troupe. Upon her return, she settled in Cambridge, MA, which most reminded her of the European cities she had fallen in love with, meeting and marrying Joseph L. Massimo, to whom she was married for 17 years. She rekindled her love of dance and musical theater, taking voice lessons, becoming involved with a community theater group, and later performing in professional dinner theater engagements. She was well known in the Newton community for her strong, vibrant and melodious voice.

In 1982, she became an entrepreneur, establishing Host Homes of Boston, a Bed & Breakfast reservation service which she ran successfully out of her home for 32 years before finally closing down in 2014 at the age of 80.

She is survived by her children, Joseph L. (Jay) Massimo and his wife, Doryam Gomez Massimo, of Newton, MA, and Renee Clare Smith and her husband, Thomas Smith, of Killingworth, CT, and grandchildren Diana Andrea Massimo, Jacob Clarence Smith and Abigail Clare Smith. She is also survived by her younger sister, Susan Mason, of Paxton, IL.

The family will hold private services. The family would like to thank the Care Dimensions Hospice team for their support.